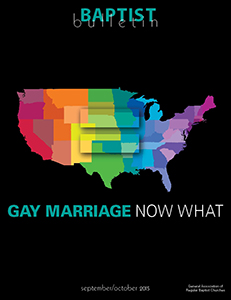 How did the majority justices of the Supreme Court rationalize their decision on same-sex marriage? “Same-Sex Marriage—Now What?” by Glen Lavy gives perspective and practical advice. As Christians watch the world become more antagonistic toward Christianity, Pastor Louis Showers has found a way to relate to unbelievers and share the gospel with them—through his hobby. Meanwhile, within Christianity, some question the validity of many Biblical proverbs. Dr. Ted Martens defends these proverbs as absolute truth. And in other circles, those who hold to the same doctrine but disagree on application have been known to fight each other. Pastor Greg Linscott is inviting them to “agree to be agreeable” at an upcoming Baptist Congress. More than ever, unbelievers need to see Baptists loving them and each other, but without compromising the fundamentals of the faith.

Read the Baptist Bulletin online or contact our subscription department to receive the print edition by mail. Ask about our group rates for churches. Read the most up-to-date information about the General Association of Regular Baptist Churches.