Connected to Christ Your Life 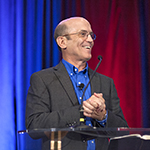 “I have been crucified with Christ,” the apostle Paul wrote. “It is no longer I who live, but Christ lives in me; and the life which I now live in the flesh I live by faith in the Son of God, who loved me and gave Himself for me.”

The doctrine of believers’ union with Christ was the theme of the GARBC’s 2015 Conference in Omaha, Nebraska, June 29—July 3. In a climate dominated by churches that are seeker sensitive, purpose driven, or gospel centered, emphasizing the centrality of Christ is vital. “Certainly the gospel is of paramount importance,” John Greening said, introducing the conference theme. “But we are a Christ-centered fellowship. We’re built upon the authority of Scripture, and we’re centered on Jesus Christ. I trust this week’s conference will bring a lot of clarity to the implication of that Christ-centeredness in terms of spiritual development and in terms of impacting the culture in which we live.”

Greening and Jordan took turns preaching through the book of 1 Peter, which emphasizes the need to grow in Christ through times of trial and difficulty. The timing could not have been more serendipitous if it had been orchestrated. Just three days before the conference began, the United States Supreme Court had legalized same-sex marriage nationwide. “We are about to be thrown into one of the greatest opportunities we’ve imagined to speak truth into the darkness,” Jordan said. “Peter was used of God to prepare believers to deal with difficulty well. Because difficulty is sometimes our very best opportunity for advancing the gospel.”

The topic of turbulent times also featured heavily in Jeff Newman’s workshop, “Helping Your Church Walk through the Wilderness.” Psalm 63 provides a model for enduring life’s difficulties in a productive and Christ-honoring way, according to Newman. Interested readers can learn more about this topic in his new book, Dependence in the Wilderness, published by Regular Baptist Press. Other workshops dealt with a myriad of engaging topics, including dangerous theological trends, practical ministry tips, safeguarding emotional health, mentoring relationships, continuing education, and cultural engagement.

On Tuesday, voting messengers received an update on the association’s initiatives and financial condition from John Greening and Michael Nolan, the GARBC’s CFO and treasurer. Greening reported on the recent relocation of the association’s resource center and unveiled the ministry’s new rebranding endeavor. “The GARBC and its ministries have developed identities that are unique and individually focused,” he said. “But they lack a unified, comprehensive brand that depicts them as all being part of one big ministry family.” The newly updated logos and branding materials will help to correct this imbalance.

The Council of Eighteen recommended three resolutions to the voting messengers. These resolutions addressed the importance of discipleship in the local church, the Regular Baptist perspective on union with Christ, and an official response to the Supreme Court’s same-sex marriage decision. After a brief discussion, the messengers approved all three resolutions.

A fourth resolution expressing gratitude for the ministry of John and Hope Murdoch was recommended and approved during one of the plenary sessions. John has retired from his position as director of the Regular Baptist Chaplaincy ministry. The resolution was accompanied by a tribute orchestrated by Stan Lightfoot, chairman of the Council of Eighteen’s chaplaincy committee. The tribute consisted of a video montage containing words of appreciation from current and retired chaplains, a meticulously collected photo memory book, a commemorative plaque, and a cash gift contributed by the chaplains. “John and Hope, this expression today comes from all of us,” said Greening. “It is just a small way of telling you how much we respect you and how grateful we are for your leadership. The opportunity to serve with you for all these years has been a delight.”

Bringing the conference to a close, Greening brought the final message from 1 Peter 5. Its concluding benediction seems tailor-made for the days in which we now find ourselves: “May the God of all grace, who called us to His eternal glory by Christ Jesus, after you have suffered a while, perfect, establish, strengthen, and settle you. To Him be the glory and the dominion forever and ever. Amen” (1 Pet. 5:10, 11).