Were It Not for Grace

Many stories of God’s goodness can be recounted from the life of Dr. Gary Anderson of Baptist Mid-Missions. These stories may never have unfolded, however, were it not for grace. 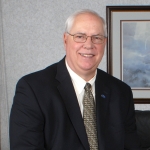 On Dec. 31, 2015, Dr. Gary Anderson left his office for the last time as Baptist Mid-Missions’ president. He finished his task well, faithfully wrapping up 30 years of leadership with BMM marked by integrity, a deep respect for God’s Word, and a shepherd’s heart. Many stories of God’s goodness can be recounted from Dr. Anderson’s life. These stories may never have unfolded, however, were it not for grace.

The Lord stepped into the life of Gary’s great-grandfather, a well-known West Virginia bootlegger. By God’s amazing grace, he was born again late in life. Gary’s grandfather struggled with alcohol dependency until he received Christ in his early 70s. Before moving to Dellroy, Ohio, Gary’s parents made professions of faith as young adults, but they weren’t established in a sound church until 1962. In that year, Gary’s mother saw a flier for evangelistic meetings being held at Carrollton Baptist Temple. Although 13-year-old Gary and his older brother felt they had better things to do on that Saturday night, they attended with their whole family. The Holy Spirit moved in each family member old enough to understand, and they surrendered to Christ. Within two years, many of Gary’s aunts, uncles, and cousins also received Christ.