Should Christians Serve in the Military?

Should Christians serve in the military? For me and for many other Christians, the answer is yes! 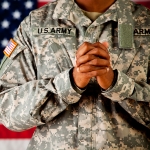 Should Christians serve in the military? For me and for many other Christians, the answer is yes! As a young chaplain in the Army Reserve, I served for a time in a basic training brigade. I was amazed at the young recruits who would line up to talk to the chaplain every morning. Some had joined the Army to get away from home and their overbearing parents. Now they were complaining because they were lonely, away from home, and being ordered around by drill sergeants. I admit that military service is not for everyone.

Is Military Service for You?

When Christians are considering military service, an important question is, “What is God’s plan for me?” Serving in the Army, Navy, Air Force, Marines, or Coast Guard is a possible answer. But decisions about the future should always be made with both open eyes and closed eyes—open in evaluating all the pros and cons, but closed in prayer.