A comparison and review of five major study Bibles. 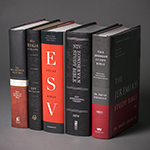 The 11th century BC was a dark time for the Children of Israel. For several hundred years they had labored under relentless cycles of enslavement and oppression, and the people were weary. Worse, they felt alone; Israel’s God—her redeemer, sustainer, and protector—had not been heard from for a very long time. The writer of 1 Samuel captures the silence and darkness of the period in a very profound declaration: “The word of the Lord was rare in those days; there was no widespread revelation” (1 Sam. 3:1).

Today, the situation is different. Compared to our counterparts of old, believers in 21st-century America suffer from an embarrassment of riches. Barna’s 2015 “State of the Bible” report estimates that 88 percent of all American households own at least one Bible, with the median number of Bibles owned being three per household. Those who do not own a Bible can obtain one easily enough. Unlike the ancient Israelites, our problem is not that God’s Word is unavailable; it’s that it is widely available and immediately accessible, yet we all too often neglect to read it.

Those who do take the initiative to spend time regularly in God’s Word often face another challenge: like the Ethiopian eunuch, they read the words of Scripture but are left wondering, “How can I [understand], unless someone guides me?” (Acts 8:30). That’s where a good study Bible can be invaluable.