Laboring for the Lord bears fruit—even when it’s not evident right away. 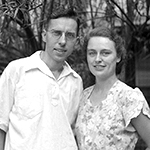 “Daddy is dead! He must be dead!” I cried to myself as I lay in a hammock, waiting for my mother to tell me what had happened to my dad. Through a blur of tears, I saw missionaries look at me with pity in their eyes, but no one would answer my questions. We had just moved to the mountainous Chittagong Hill Tracts a month before. My father, Paul Miller, had then left for Chittagong to get the rest of our belongings. Three days later, we received word that he was sick and that we must come at once. It was night as we crowded into a dugout so a boatman could pole us downriver. The next day we rode old buses over rough brick roads and finally took a train the rest of the way to the city, arriving early the next morning.

Now my dad was nowhere to be seen, and no one would tell me where he was. Finally, my mother, Helen, called us children into a room and told us that our daddy was with Jesus in Heaven. He was already buried, and there had been only a small graveside service. He had died of polio, we found out, and Muslim law orders that bodies be buried within 24 hours of death. Daddy was 42. I was 9 years old, and the year was 1959.