A distinguished Regular Baptist minister is promoted to Glory. 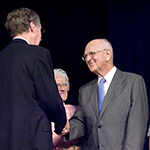 Standing at a lectern, he moves from behind it to speak conversationally to the men in the room. Before he begins, he wants his audience to know how God led him to be speaking about the day’s topic: ministry to internationals. So he summarizes. And when Eldon Brock summarizes God’s hand on his life, he talks about it in increments of 20 years.

He spent the first 20 in Illinois, where he was born in 1926 to Lacy Edmond and Treva Mae Brock. At 19 he accepted Jesus as his Savior. And at 21 he married his wife of 57 years, Gertrude Mae McKinney.

20 Years in the Pastorate

Eldon and Trudy moved to Johnson City, New York, so he could study at Baptist Bible Seminary. His learning wasn’t merely academic, for during those student years, he pastored his first church, Northfield Congregational in Sydney, New York. In 1952, the year he finished his pastoral course, he was ordained by his home church, Riverside Baptist in Decatur, Illinois. Next he pastored First Baptist Church, Castle Creek, New York (1952–1958). He recalled that the church was old with a small congregation, “but they accepted some changes and doubled in size during our six years.” Then the Lord called him to Calvary Baptist, Lockport, New York (1958–1967), where he followed Albert Williams, a church planter. “These people had a great passion for the city, and we had a wonderful ministry with growth and many going into Christian service,” he said in summary of his ministry there. Then it was on to Parr Memorial Baptist in Petoskey, Michigan (1967–1971). Of his years there, he said, “We saw several mature in their love for God and in leadership. I became involved in Lake Ann Baptist Camp as volunteer pastor.”

When Eldon first went to seminary, he had no idea where God would lead him, saying, “I ended up a pastor for 20 years.” During those years he served on the councils of the Empire State Fellowship (1962–1965) and the Michigan Association of Regular Baptist Churches (1969–1970). Demonstrating his interest in home missions, he also served on the board of the Fellowship of Baptists for Home Missions (1961–1990).

When God pulled Eldon out of the pastorate and into a Christian camp as director, no one was more surprised than him. “God picked me up and planted me,” he said, although he had expected his camping ministry to be short. From 1971, when the camp was incorporated, until his retirement in 1992, Eldon served as executive director of Lake Ann (Michigan) Baptist Camp. He held membership in Christian Camping International and was an officer of the National Association of Regular Baptist Camps, which he helped begin in the ’70s.

Eldon believed that Christian camps are an effective tool to strengthen local churches and wrote “Good Camps Produce Great Results,” published in the May 1986 Baptist Bulletin. He described Christian camping as a training camp for Christian living and said that Christian campers make age-appropriate decisions that “give Biblical value to their relationship with God, family, church and others.” As a camp director, he wanted to “help campers understand and enjoy the practical side, the important side, of what being a Christian is.”

As Eldon faced retirement, he started asking God what he could do for the next 20 years. While he waited for God’s direction, Eldon conferred with camps across the U.S. and in eight foreign countries, including Myanmar (Burma). While consulting Kachin Baptist churches there, he “fell in love with this independent Bible-believing people and the college they started without American help.” His bond with the people led to his making nine ministry trips to serve their churches and college. During this time he saw the need for and benefit of assisting Kachin Bible College teachers to earn graduate and post-graduate degrees to help them raise their college’s academic level. This led to the creation of Closed Door Ministries, which Eldon summarized as “assisting a few to disciple many to reach millions.”

For seven years Eldon sponsored and mentored three Kachin men as they each earned a doctor of ministry degree at an American seminary. All three returned to key leadership roles in Kachin Bible College. In 2005 Hanson Baptist Bible College, also in Myanmar, granted Eldon an honorary doctor of divinity degree.

Also in 2005, the Lord called Trudy home to Glory. Her obituary shares that “the thing she enjoyed most when she was saved at age 17 was peace with God.” She had always said that God’s call to her husband was her call too. But now God had called her to Heaven. Eldon’s loss did not, however, stop him in his tracks. Instead, looking around at the multitudes of foreigners coming to the U.S. for education, business, and the like, Eldon became burdened to help churches reach those multitudes. Thus Ethnic to Ethnic Ministries, or E-Tem, was born. Of this ministry, Eldon said, “From past experience, I know that my gift is to develop the concept and foundation of a program, but I need to step aside to allow a man with different talents to build and promote this ministry into what it can be. I am praying for that man so I can get out of the way and allow it to grow.”

Eldon continued to promote CDM and E-Tem, spoke and wrote on multiethnic ministries and multicultural churches, and participated in roundtable discussions on these subjects, including at the 2011 and 2012 GARBC Conferences.

During these so-called retirement years, God gave Eldon a new helpmeet when he married Ruth E. Compton, a former missionary to North American Indians for 50 years.

Eldon’s 20 nonretirement “retirement” years ended in 2012, the year he received a GARBC Service Award. In nominating him, Gerald Webber, then pastor of Maranatha Baptist Church, Sebring, Florida, praised God for giving Eldon “a unique ability to see a need and find a way to meet it.” Pastor Webber said that like Lake Ann Camp, CDM “burgeoned on the foundation [Eldon] laid, and expanded into a major force for Christ internationally.” Webber went on to say he thought E-Tem would also become “a solid and substantial ministry as [Eldon] finds the man of God’s choosing to assume its leadership.”

In 2014–15, both Ruth’s and Eldon’s health took drastic turns. In November 2014, Ruth suffered a stroke; in December she underwent surgery on her spine; in 2015 she was diagnosed with dementia. Eldon was diagnosed with stage 4 cancer and suffered much pain. In August the two moved into separate rooms at Maranatha Manor in Sebring, Florida. Eldon updated praying friends and family via e-mail, always sharing a verse of Scripture that God had shown him to strengthen him for the trial. “All my life [God] has promised to complete the plans He has for me. Now I pray that I will be faithful in serving Him through and by this limiting health problem. Since God does not forsake me, I pray I can be faithful in all that lies ahead,” he wrote.

On Aug. 25, 2015, the Lord called Eldon Brock to Heaven. On hearing of his Homegoing, GARBC National Representative John Greening said that Eldon was a remarkable example of Caleb-like vision and determination. “He was always looking for a new ministry mountain to climb. His relentless passion served to repeatedly spur all of us in his large circle of influence to achieve more than we thought possible. His hunting dog persistence refused to let us get distracted from the objective.” Today Eldon Brock is enjoying his life in Heaven, where he will spend a never-ending number of 20-year increments.