Haiti: A Time for Miracles 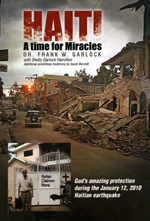 Frank Garlock, a familiar name to many people in fundamental Baptist circles through his extensive music ministry, was in Haiti on Jan. 12 of this year when the earthquake hit. This is an eyewitness testimony of God’s care and protection, as well as a report of good things that have occurred as the result of the disaster: “Satan usually works overtime to make sure God gets the blame for tragedies. However, this tragedy has driven Haitians to God. Many voodoo priests have complained that contact with their spirit world has been almost impossible. This abandonment has initiated a reversed abandonment from witchdoctors. One voodoo priest reported that shortly after the quake on January 12, something happened in his seance with the evil spirits that had never happened before. The spirits said: ‘We can’t take this anymore—we’re leaving!’ After failing in his efforts to call back the spirits, the voodoo priest accepted Christ as Savior a few days later. . . . Our prayer is that the demonic powers of voodooism that has held Haiti captive for generations and crippled them economically, socially, and morally will be broken eternally and Haiti will have a new covenant with Jesus Christ.”

The book begins with a historical background of the country and includes several pages of color photos.

Previous post Alcohol Today: Abstinence in an Age of Indulgence