Alcohol Today: Abstinence in an Age of Indulgence 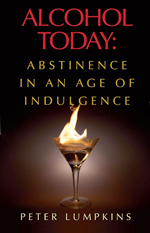 Many professing believers are now drinking alcohol, even labeling as legalistic and pharisaical those who don’t.
Why this shift? Lumpkins explores this trend from a Biblical stance. He gets into the often tricky Biblical passages and arguments people use to justify use of alcohol, such as the idea it’s all right to
drink as long as one doesn’t get drunk.

One interesting chapter on America in the 1920s and ’30s is “Prohibition Revisited.” Many liberals today would, no doubt, view the chapter as politically incorrect. Lumpkins also gives personal testimony concerning the sorrows he and his family encountered due to alcohol when he was a child. Jerry Vines, a past president of the Southern Baptist Convention, writes in his foreword, “I pray this book will become a standard in the field of total abstinence about intoxicating beverages. The lives of thousands of pastors, their families, and the families of their congregations are at stake.”

Previous post The Art of Dying: Living Fully into the Life to Come