From the earliest days of the church, speculations regarding end-time events have abounded. People in every generation have set dates for Christ’s return. 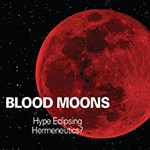 From the earliest days of the church, speculations regarding end-time events have abounded. People in every generation have set dates for Christ’s return. The identity of the Antichrist has been debated. “Wars and rumors of war” have been offered as proof that Christ’s return is at hand. And now a new voice appears on the scene. It demands a closer look.

A recent book by Mark Biltz, Blood Moons: Decoding the Imminent Heavenly Signs, theorizes that in light of four blood-moon eclipses in 2014 and 2015—and their synchronizing with key Jewish feast days—something significant is going to take place in the nation of Israel and in the world in 2015. In addition, John Hagee, founder and president of John Hagee Ministries, has written a book called Four Blood Moons: Something Is About to Change, based essentially on Biltz’s book. These books, as well as YouTube videos, websites, and television offerings, are attracting a great deal of attention.

While the blood-moon hypothesis draws from a number of Scriptures, it focuses on Joel 2:31: “The sun shall be turned into darkness, and the moon into blood, before the coming of the great and awesome day of the Lord.” Biltz suggests that the phrase “moon into blood” refers to a lunar eclipse, the kind of eclipse that has a reddish appearance in the sky.

Thank You for Your Support

Thank you to the many donors who gave to us in 2019. We are excited about how God is on the move in communities across ...more

Three ministry leaders from Bethany Baptist Church traveled to San Andres, Cuba, a small farming community in the western part of the country, to teach ...more