Why Bother Exposing Errors in Eschatology?

Some readers may wonder why we chose to devote so much space in this issue to critiquing the works of John Hagee, Mark Biltz, and Jonathan Cahn. After all, if these authors are wrong, isn’t it a waste of time and a potential distraction to occupy ourselves with refuting them? 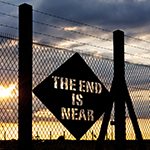 A Word from the Editor

Some readers may wonder why we chose to devote so much space in this issue to critiquing the works of John Hagee, Mark Biltz, and Jonathan Cahn. After all, if these authors are wrong, isn’t it a waste of time and a potential distraction to occupy ourselves with refuting them? (First Timothy 1:4 does warn us not to “give heed to fables, . . . which cause disputes rather than godly edification.”) And if somehow the Baptist Bulletin has missed the boat on this one, and these authors do turn out to be correct, aren’t we perhaps setting our table with a massive helping of humble pie? Mightn’t Gamaliel’s advice be applicable here? “Keep away from these men and let them alone; for if this plan or this work is of men, it will come to nothing; but if it is of God, you cannot overthrow it” (Acts 5:38, 39).

In spite of these possible objections, I believe it is both valid and worthwhile to address current eschatological fads like the blood moons hypothesis and the prognostications of Mr. Cahn. For one thing these books and hypotheses have proven remarkably popular. Any time a book claiming to present Scriptural truth lands on the New York Times Best Sellers list, it behooves us to examine it while simultaneously searching the Scriptures themselves “to find out whether these things [are] so” (Acts 17:11). Of course the intent in so doing is not to malign or attack anyone; rather, it is to cultivate a craving for “the pure milk of the word” (1 Pet. 2:2), and to accept no substitutes.

But more specifically, I think that eschatological errors in particular demand addressing, because they reflect badly on all of us who have “loved [Christ’s] appearing” (2 Tim. 4:8). In his foreword to Arnold Fruchtenbaum’s The Footsteps of the Messiah, Charles Ryrie wrote, “Eschatology seems to suffer at the hands both of its friends and its foes. Those who play it down usually avoid assigning specific meaning to prophetic texts. Those who play it up often assign too much.” Examples of the latter category could be multiplied ad nauseam. Exercising dubious hermeneutical methods, many have set dates for Christ’s return, only to experience great disappointment. These include William Miller (1844), Charles Taze Russell (1874, 1914), Herbert Armstrong (1936, 1943, 1972, 1975), Pat Robertson (1982, 2007), Edgar Whisenant (1988, 1989, 1993, 1994), and Harold Camping (1994, 1995, 2011), to name only a few. Then there have been doomsday preachers aplenty to warn of impending judgment in light of Bible codes, bar codes, Y2K, microchips, various comets, and the Mayan calendar.

In each of these cases, the predictions have failed spectacularly. And with every such failure, the serious study of Biblical prophecy is besmirched just a little more. That’s why it is so important to meet eschatological fads head-on, evaluate them by the Scriptures, and discard them should they fail to measure up. It is a means of disassociating ourselves from those who peddle erroneous eschatology. It is also an opportunity to insist instead that we look expectantly for Christ, not for blood moons or Bible codes, but for Christ Himself. Our blessed hope is the assurance that Jesus is coming back for us! Surely that prospect is exciting enough without supplemental prophetic speculation and sensationalistic stargazing.

Hunger around the World Is Getting Worse

An association of churches in Ghana thanks Regular Baptist International for its assistance in a COVID-19 pandemic relief ...more

COVID-19 and the prohibition against meeting in groups haven’t stopped women using RBP Women’s Bible Studies from using the internet to study God’s Word together. ...more

In the midst of severe flooding in Michigan, water filled the parking lots of Calvary Baptist Church but stopped short of reaching the church ...more