The Fatal Flaws of Cahn

If there is one quality believers need desperately in today’s cultural climate, it is Biblical discernment. 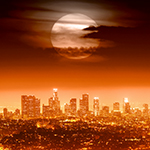 If there is one quality believers need desperately in today’s cultural climate, it is Biblical discernment. This astuteness is especially needed when a Messianic Jew takes an Old Testament verse or two and incorrectly exegetes those texts. Then based on his faulty hermeneutic, he writes books announcing that these ancient Old Testament texts written specifically to Israel suddenly and mysteriously predict woe and divine judgment on the United States. Such is the sad case with Jonathan Cahn’s two books.

Cahn’s new book, The Mystery of Shemitah, is an expansion of the 17th chapter of his best seller, The Harbinger (2011). Both books have a common thread. Cahn believes Isaiah 9:10 is not only a mystery that tells of Israel’s response to the Assyrian threat during the prophet’s time, but is actually a secret prophecy foretelling the events that occurred in the U.S. on Sept. 11, 2001 (Harbinger, 46). Cahn believes the fallen bricks mentioned in Isaiah 9:10 are the rubble of New York’s Twin Towers. This serves as the first harbinger of God’s impending judgment because of America’s sin. The terror attacks, according to Cahn’s calculation, occur in a year of Shemitah, 2001 (Shemitah, 130). Thus, the two books are interrelated: The Harbinger tells of the mystery of one Old Testament verse as applied to the U.S., and The Mystery of Shemitah gives the timing of these catastrophic events and more to come. Both books suffer from the same five fatal flaws.

You Cannot Help but Worship

You may be either an atheist, an agnostic, a Muslim, a Jew, a Christian, a Wiccan, a Buddhist, a Hindu, or simply an individual who ...more

4 Activities To Fight the Wintertime Blahs

The Why Factor of VBS

RBP VBS emphasizes the "why factor," which teaches kids why they should believe what they are being ...more