A little more than five years ago I had a conversation that has impacted my entire ministry. 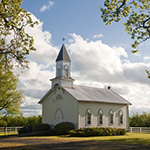 A little more than five years ago I had a conversation that has impacted my entire ministry. My family had just moved to Fowler, Colorado, and the work of settling into the parsonage included meeting our neighbors. Our next-door neighbor told me something that shocked me: “I don’t think I would even know what the former pastor’s voice sounded like.” As I reflected on that statement, I determined that to effectively minister to people in this small, close-knit community, I would need to be visible and involved in people’s lives outside the walls of our church building.

Living and ministering for five years in a southeast Colorado community has been a welcomed, albeit eye-opening, experience. One of the first conversations I had with a church member included him telling me that I didn’t need to bother stopping at stop signs in town, because as small as the community was, everyone would know where I had been and where I was going, and they would just stay out of my way. Though I was born in a small community in Pennsylvania, grew up in a rural township in Ohio, and lived seven years in central Iowa, nothing exactly prepared me for ministry in the grasslands of the American Southwest. I have had to adapt my lifestyle and presuppositions in ministry in a number of ways.

Thank You for Your Support

Thank you to the many donors who gave to us in 2019. We are excited about how God is on the move in communities across ...more

Three ministry leaders from Bethany Baptist Church traveled to San Andres, Cuba, a small farming community in the western part of the country, to teach ...more