The Mission Field Comes to Our Neighborhood

A church’s testimony of God’s work in breaking barriers and realizing possibilities. 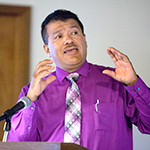 Washington, Indiana, is a community of 12,000 nestled in Southwestern Indiana. In the northwest section of town dwells a large population of Latinos who came to Washington to work for a meat-processing plant. They are hard workers and good people, but the barriers of language and culture have, for the most part, kept them isolated from their English-speaking neighbors. Most attend church, but their choice is limited to either the Catholic or the Pentecostal congregation, neither being a good choice for becoming a mature disciple of Christ. The prospect of Grace Baptist Church making disciples of these “foreigners” was slim at best. We would occasionally talk about it but always concluded there wasn’t much we could do. We did not understand their culture, and we did not have the resources to bridge the language gap. It would take the gracious work of God to make such a ministry possible.

Posted in All Current Issue Posts, Jan/Feb '16 Issue, The Baptist Bulletin Magazine on January 28, 2016.
SHARE ON: