In recent American politics, we have been introduced to the concept of quid pro quo, a Latin phrase which refers to an exchange of goods or services that is offered with a contingency or expectation of receiving something in return.

The arrangement we make with God 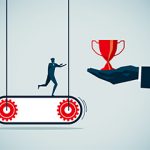 In recent American politics, we have been introduced to the concept of quid pro quo, a Latin phrase which refers to an exchange of goods or services that is offered with a contingency or expectation of receiving something in return.

While this concept may seem new to us in the realm of politics, the reality is we operate under this basic set of assumptions all the time. In fact, I would argue it falls under basic human nature for most of life’s interactions. For example, the car dealer isn’t offering you that “free” cup of coffee merely because he thinks you might be thirsty; rather, he has an agenda in mind—that cup of coffee comes with some strings attached. And this sales mentality runs rampant through all our lives. If we are honest, when we run the thread of actions back to their root motivations, we will discover forms of selfishness: I do x because I will get x in return. If that were not bad enough, we import this line of thinking and this way of life right into our approach to religion as well.

Posted in All Current Issue Posts, Jan/Feb '20 Issue, The Baptist Bulletin Magazine on February 14, 2020.
SHARE ON:

An association of churches in Congo thanks Regular Baptist International for sending Bibles, enabling church members to read the Word of God at home. ...more

Churches Carry on . . . with Caution

As states loosen coronavirus restrictions, churches are taking steps to reopen. But those steps come with plenty of ...more

By registering for our virtual GARBC Conference June 29–30, you will be able to join a breakout session each day, choosing from three dynamic ...more

Hunger around the World Is Getting Worse

Because of your generosity 14 partners in 9 countries were able to get over $10,000 in food for their churches and community. Thank you! There are ...more