I am thankful for an invitation from the editor of the Baptist Bulletin to provide more examples of archaeological discoveries that affirm our trust in the historicity and reliability of Scripture. 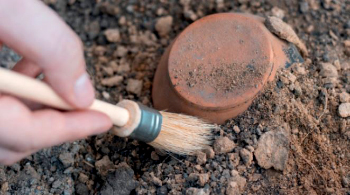 I am thankful for an invitation from the editor of the Baptist Bulletin to provide more examples of archaeological discoveries that affirm our trust in the historicity and reliability of Scripture. We will be looking at four such instances, two from the Old Testament and two from the New Testament.

In my last article, I described an archaeological discovery that silenced the critics—the Nabonidus Cylinder. This artifact affirms the reality of the historical character recorded in the Bible and known as Belshazzar. In this article I will consider another discovery named after Nabonidus, specifically the Nabonidus Chronicle. This artifact is helpful on two fronts: it affirms the historical reliability of Scripture and unlocks what was once a mystery.

Paul Weaver (PhD, Baptist Bible Seminary) is associate professor of Bible exposition at Dallas Theological Seminary and host of the Faith Affirming Findings podcast, a program devoted to sharing discoveries from Biblical archaeology that will affirm your faith and the historicity of Scripture.