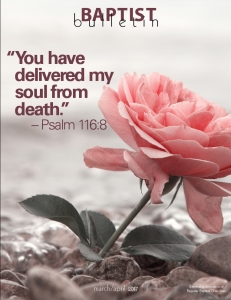 This issue considers three death-related subjects: abortion, mourning, and the believer’s death to sin/self. Kimberly Ross gives an update in “The Battle against Abortion,” while James Saxman summarizes Biblical guidance for “Ministering to Those Who Mourn” and Phil Webber answers “Is There an Art to Dying Well?” Jeff Straub, meanwhile, takes readers back to the Protestant Reformation for its 500th anniversary, beginning with a look at Martin Luther and justification by faith. Clare Jewell (“Get Moving”) and Haley Seboe (“Restored Church: Reaching Communities One Church Plant at a Time”) report on Regular Baptist church planting, while “Weaving Military Chaplaincy into the Pastorate” looks at a facet of chaplaincy, another arm of Regular Baptist Ministries.

Contact our subscription department to read the Baptist Bulletin online or to receive the print edition by mail. Ask about our group rates for churches. Read the most up-to-date information about the General Association of Regular Baptist Churches.

Posted in All Current Issue Posts, Mar/Apr '17 Issue, The Baptist Bulletin Magazine on March 20, 2017.
SHARE ON: