Invasion of the Body Snatcher

We will all, Paul writes, be caught up “in the clouds to meet the Lord in the air, and so we shall always be with the Lord” (1 Thess. 4:17). Can there be any greater promise than that? Can you conceive of any greater comfort? 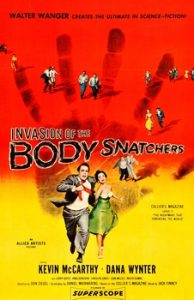 The Pretribulational Rapture of the Church, Part 1

I’ve always loved the title of Walter Wanger and Don Siegel’s classic 1956 film Invasion of the Body Snatchers. The film tells the story of malevolent extraterrestrials invading the earth, not by means of militaristic conquest in flying saucers (as was so often the case in science fiction flicks of that era), but rather through a shrewd strategy of infiltration: they would secretly replace human beings with exact duplicates (the “pod people”), thereby expanding their influence gradually and eventually winning dominance of the earth without having to fire a shot.

The Bible also foretells an invasion of a Body Snatcher, Who will come to the earth in secret, orbit the planet, and remove members of its populace. This, however, is no hostile extraterrestrial invasion; it is the benevolent coming of a bridegroom to retrieve His betrothed and escort her home. For those who are left behind, this event will herald an unprecedented period of chaos and confusion. But for those who are snatched away, it will represent the culmination of all their hopes and dreams.

I refer, of course, to the rapture of the church. The Body Snatcher is the Lord Jesus Christ, an extraterrestrial of sorts, I suppose; He—Whose origin is not of this earth—will return to snatch away His people before the onset of the seven-year Tribulation. For centuries the church has looked to the clouds, eagerly awaiting the Savior’s return. It is our blessed hope.

This series of articles will explore the doctrine of the Rapture. Future installments will present a multipronged case for the Rapture’s pretribulational timing. But first, it is necessary to look at the Rapture’s basic characteristics as it is described in the New Testament.

This passage occurs in Jesus’ Upper Room discourse, His last extended teaching time with His disciples before His betrayal. The preceding week had been perhaps the most momentous week in Jesus’ public ministry. The Triumphal Entry. The ecstatic crowd. The hostile religious leaders. All week long, there had been a feeling of anticipation in the air, as though something major were about to happen. And it was.

Contrary to all the disciples’ expectations, however, this Passover celebration was not a prelude to glory or political triumph. Rather, it was the last period of calm before the coming storm, the final glimmering of twilight before the onset of darkness. Their lives would shortly be upended. Their faith would be shaken. Their spirits would be crushed. Their Savior would be taken away from them.

It should come as no surprise that Jesus, ever compassionate and caring, seeks on this occasion to steel the disciples’ hearts and preempt their fears by speaking words of comfort. He promises to leave them with two things: another Helper (the Holy Spirit) and the certain promise of His return.

Do not let your heart be troubled; believe in God, believe also in Me. In My Father’s house are many dwelling places; if it were not so, I would have told you; for I go to prepare a place for you. If I go and prepare a place for you, I will come again and receive you to Myself, that where I am, there you may be also. (John 14:1–3)

Thomas finds this perplexing (and I doubt he is alone among the disciples in that sentiment). “Lord, we do not know where You are going, how do we know the way?” he asks. Jesus answers: “I am the way, and the truth, and the life; no one comes to the Father but through Me” (John 14:5–6).

This passage lacks the level of detail that later passages will add, but it does contain the initial promise of Christ’s second coming to retrieve His own people. Those for whom He will return are believers (note the assumption of belief in God and Christ in verses 1–2). And the purpose for this return is for Christ to receive believers to Himself (v. 3). The specific verbiage used here is tremendously important, especially since it has become fashionable in recent days to view this promise non-eschatologically, as a reference to Christ’s coming indirectly via the Holy Spirit’s arrival on the Day of Pentecost. Setting aside the Trinitarian confusion that arises when one attributes the Spirit’s activity to the Son, this interpretation simply does not comport with the text’s language. It should be obvious that at Pentecost the believers received the Spirit to themselves, whereas this verse describes the Lord Jesus receiving believers to Himself when He comes again. It is most naturally understood, then, as a promise pertaining to His second coming. This appears to be how the disciples and the first generation of Christians understood it, for they made the soon return of Jesus Christ a major component of their gospel proclamation.

Paul had spent a good deal of time with the Thessalonians during his second missionary journey, and seems to have taught them quite a bit about the doctrine of last things. But after Paul’s departure, the Thessalonians evidently came up with a potential theological problem: the Rapture and the Second Coming sound wonderful, but what about those believers who have already died? Will they miss out on these events?

Paul writes this passage to correct that misunderstanding. No, he teaches, those Christians who have died (he is using “fallen asleep” in this passage as a euphemism for death) will not miss out on the Rapture. In fact, they will experience it first: “God will bring with Him those who have fallen asleep in Jesus. . . . We who are alive and remain until the coming of the Lord, will not precede those who have fallen asleep.” Like Jesus’ words in John 14, this is offered as a source of deep comfort. We grieve at the death of our fellow believers, but not hopelessly. We can rest secure in the knowledge that Christ will return to raise them from the dead.

Paul then helpfully provides a blow-by-blow account of what the Rapture will entail. I see in this passage seven successive stages. First, the Lord’s descent. He comes not to the earth (as the posttribulational position would require), but to the clouds. This calls to mind the angels’ promise to the disciples after Christ ascended and “a cloud received Him out of their sight” (Acts 1:9): “This Jesus, who has been taken up from you into heaven, will come in just the same way as you have watched Him go into heaven” (Acts 1:11).

Third, the voice of the archangel. This is most likely a military concept. When a commander wished to issue orders to his companies, he would often relay them via criers or heralds, who would ride up and down the ranks relaying the orders at the top of his lungs.

Fourth, the sounding of the trumpet. Like in the previous stage, the idea here is probably that of a signal or a relayed command. Throughout the Old Testament trumpets were used for various purposes, but most often they were used for signaling or relaying orders (e.g. Exod. 19:13; Lev. 25:9; Josh. 6:5; Neh. 4:20). Stages 2–4 all refer, then, to Christ’s issuing a call to all His people to rise up and join Him in the clouds.

Fifth, the rise of the dead. This is not the gruesome horror movie spectacle of zombies emerging half-decomposed from their graves; it is a true resurrection, the total reconstitution and glorification of the human body and the bestowal of new life to that which was formerly dead. This will be described in further detail in another passage (1 Cor. 15:50–58).

Sixth, the ascent of the saints. Just as Christ ascended physically from the earth, so also will His people ascend at the sound of His beckoning command. First the newly resurrected dead and then the living saints will rise up to the clouds, irresistibly drawn to the presence of their Savior and King.

And finally, seventh, the meeting with the Lord. That blessed moment all Christians spend their lives longing for. We will all, Paul writes, be caught up “in the clouds to meet the Lord in the air, and so we shall always be with the Lord” (v. 17). This promise recalls the words of Christ discussed earlier: “that where I am, there you may be also” (John 14:3).

Can there be any greater promise than that? Can you conceive of any greater comfort? In the midst of all life’s ups and downs, despite all the aches and pains and disappointments that must surely come in a fallen world, there will always be this blessed hope and certain promise: Christ Jesus is coming again! And when He comes, He will receive us to Himself to be with Him forever. May the Lord hasten the arrival of that day.

David Gunn is director of Regular Baptist Press and managing editor of the Baptist Bulletin. All Scripture quotations in this article are taken from the New American Standard Bible.