How Should We Then Think about Climate Change? 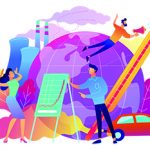 It’s tough as a Christian these days to know what to believe about the controversial issues in the news. So many voices clamor for our attention, and no two people seem to agree on anything.

People of faith face a difficult challenge because we have a different worldview than most others. Many of us tend to avoid all the controversy and ignore what’s going on around us. However, we’re admonished in Scripture to be in the world but not of the world. Jesus Himself, in His high priestly prayer, said,

One of the foremost evangelical theologians and philosophers of the twentieth century, Francis A. Schaeffer, addressed this conflict in his book and documentary film series, How Should We Then Live: The Rise and Decline of Western Thought and Culture.

In his books Schaeffer attacked the humanistic influences of the Renaissance, the Enlightenment, and Darwinism. He traced Western history from Ancient Rome and developed principles by which he thought we should conduct our lives today.

When a culture is based on humanism—which he defined as a value system rooted in the belief that man is his own measure, man is autonomous, and all values are relative—then we have no way to distinguish right from wrong. This leads to fragmentation of thought, despair, alienation, and chaos.

Schaeffer advised that basing our worldview on the Bible, on the infinite and personal God Who is there and has spoken, provides an absolute by which we can conduct our lives and by which we can judge society. This leads to what he called freedom without chaos.