Creation: From Ruin to Redemption 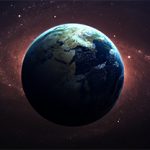 On a muggy May evening in 1982, a dozen 10-, 11-, and 12-year-olds with big league aspirations were fielding ground balls on a ball diamond outside the small farming community of Adrian, Missouri. Some were kicking at the dirt with their cleats. Others were catching up on the latest preteen chatter. Our coach, my father, was hammering home the number-one rule of fielding a ground ball: “Keep your glove on the ground!”

Meteorologists had warned that severe thunderstorms were a possibility. As the sky began to darken and the light rain shower became a downpour, everyone scrambled for shelter. We huddled together under the eave of the concession stand and watched as the rain turned to hail. The sky groaned in long, loud peals of thunder. Lightning cracked in jagged streaks of brilliant light. And then it all stopped. Suddenly. Everything went eerily quiet and calm. Dad stepped away from the shelter of the eave and glanced southwest. I don’t remember what Dad said; I only remember what I saw. A wall cloud had dropped a dark funnel that reached the ground. After a split-second, it disappeared only to reappear larger and nastier.

I stood there mesmerized. I had studied tornadoes in school. My classmates and I had successfully executed multiple tornado drills. I had scoured the tornado section of the World Book Encyclopedia, fascinated by pictures of tornadoes and the devastation left in their wake. But this was the first and—as of today—the only time I have witnessed a tornado’s power and fury firsthand.

There were no reported injuries that spring day. The EF-2 twister tore a narrow path west and north of town, uprooting trees, leveling outbuildings, and ripping siding from homes. Meteorologists referred to it as Mother Nature. The government labeled it a natural disaster. The insurance industry, though, got it right: the tornado of May 1982 was categorized as an “act of God.”

Previous post How Should We Then Think about Climate Change?