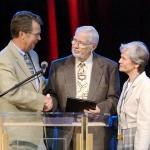 I wonder what Timothy would have said if he had been asked to preach the memorial service for the apostle Paul. Certainly Timothy would have spoken of his mentor and spiritual father figure’s ministry with profound respect and affection. Paul’s influence on his understudy Timothy was significant. The two personal letters from Paul to Timothy recorded in the New Testament give us thought of what Timothy’s tribute might have included.

The correspondence from Paul to Timothy parallels the ministry wisdom that Dr. Mark Jackson shared with me. I began my pastoral ministry as Dr. Jackson’s associate. I was fresh out of Bible college and seminary. I was engaged to my future wife, Daria. We would be married a few months after starting my responsibilities as the youth pastor at Walnut Ridge Baptist Church in Waterloo, Iowa. The imprint that Mark, Irene, and their family made on Daria and me in those formative years continued decades later as we served together at the Regular Baptist Ministries Resource Center.

Recently the Jackson family asked me to conduct the memorial service for Mark. In reflecting on my many memories of our experiences together, I realized that I could use Paul’s two letters to Timothy to organize my tribute to Mark, and ultimately to the Lord Jesus Christ. At the funeral service, I shared six of the lessons I learned from my mentor and friend. These lessons represent the man Dr. Jackson was—and, as he would expect me to say, the God he served.

Mark grew up in a pastor’s home. His father went on to be the president of a Bible college and the leader of a national association of churches. Mark could have easily assumed he was part of “the club” simply because of his heritage. But he recognized he was a sinner and separated from God, understanding that he needed to believe in Jesus Christ alone for salvation.

Just as Paul communicated to Timothy, Mark was keenly aware he was in the ministry because of God’s grace. “This is a faithful saying and worthy of all acceptance, that Christ Jesus came into the world to save sinners, of whom I am chief. However, for this reason I obtained mercy, that in me first Jesus Christ might show all longsuffering, as a pattern to those who are going to believe on Him for everlasting life” (1 Tim. 1:15, 16).

Mark loved music that spoke of God’s grace and exalted the Savior. He loved to sing that music, play it on his trombone, and lead a congregation in worshiping. Every time he preached, he would proclaim the gospel and call people to place their trust in Christ.

Mark was certainly not stuffy; he loved to laugh. We had a great time in staff meetings, joking and telling stories. However, he always conducted himself with a dignified deportment that suited the Head of the church, Jesus Christ. Mark cared deeply about the qualities that exemplified both a pastor and a deacon (1 Tim. 3). By precept and example, he led his staff and deacons in pursuing those qualities. He taught me how to win the respect and trust of people in the church, just as Paul counseled young Timothy to be an example “in word, in conduct, in love, in spirit, in faith, in purity” (1 Tim. 4:12). Also, Mark followed Paul’s model by mentoring me in the skill of wise interpersonal communication with various people in church. “Do not rebuke an older man, but exhort him as a father, younger men as brothers, older women as mothers, younger women as sisters, with all purity” (1 Tim. 5:1, 2).

Family is worth the investment.

As Mark’s dad and mom loved him and taught him allegiance to the Word of God, so did he with his family. It was that same type of family commitment that Paul described to Timothy. “But you must continue in the things which you have learned and been assured of, knowing from whom you have learned them, and that from childhood you have known the Holy Scriptures, which are able to make you wise for salvation through faith which is in Christ Jesus” (2 Tim. 3:14, 15).

It was a wonderful testimony of familial love, loyalty, and legacy to see the entire Jackson family in attendance at the funeral and graveside. Lending support to Irene were Mark’s three daughters, daughter-in-law, grandkids, and great-grandkids, as well as his brother and sister. The only one missing from the gathering was Mark and Irene’s son, Pastor Paul Jackson, who had gone Home to be with the Lord in 2005. Now Mark is reunited with Paul in Heaven. Mark’s true heart contentment for his family would be that expressed by the apostle John: “I have no greater joy than to hear that my children walk in truth” (3 John 4).

The Word of God is the priority of ministry.

Mark’s style and flamboyance made his pulpit messages memorable. I recall his dramatic pauses, his bigger-than-life presence in the pulpit, and his occasional object lessons using items such as a ram’s horn (that he blew with all his might). Most unforgettable was his vocabulary. When listening to Mark’s sermons, I made it a habit to note certain words, looking them up later in a dictionary to improve my vocabulary. To this day I believe Mark was so good with words that he could coin them on the spot.

Beyond his large personality, Mark’s ministry was about preaching the Bible. His dad had preached it, he preached it, his son Paul preached it, and now grandkids are preaching and teaching it. The apostle Paul told Timothy, “Preach the word!” (2 Tim. 4:2). Dr. Jackson was selected to be the president of a Bible college and seminary that trains men and women to know and teach the Word. He cautioned pastors and students about false teachers who would lead people astray. He traveled the globe with indefatigable drive to proclaim the Word and encourage pastors to do the same. He raised hundreds of thousands of dollars so that internationals could have resources to teach the Word.

Life is often difficult at the end.

The apostle Paul communicated to Timothy that many of his friends had left him. The onetime globetrotting missionary was confined to a small room where he was imprisoned. He was cold. He had very little to read. Likewise, in Mark Jackson’s final days, his large life was reduced to a small room in a care facility. His mind was not what it once was. His beloved son Paul had left him after losing an agonizing battle to cancer.

The inevitable realities of life in a sin-cursed world crash down on us at times. Lest we feel we are alone in our heartaches, we can be reminded that even God’s choice servants like the apostle Paul and Mark Jackson experienced the sufferings of life and death.

Faithful service will be rewarded.

I knew some of life’s obstacles, resistance, heartaches, and later health difficulties that Dr. Jackson experienced. I remember heartfelt, candid conversations with him. But through it all, I watched him remain faithful to his wife and family, his ministry, and most of all to his Lord. Mark could honestly repeat the words of Paul, “I have fought the good fight, I have finished the race, I have kept the faith. Finally, there is laid up for me the crown of righteousness, which the Lord, the righteous Judge, will give to me on that Day, and not to me only but also to all who have loved His appearing” (2 Tim. 4:7, 8).

As the apostle Paul looked back on his life and made the following statement, his words seemed like a perfect summary of Mark Jackson’s life of service: “But the Lord stood with me and strengthened me, so that the message might be preached fully through me, and that all the Gentiles might hear” (2 Tim. 4:17).

My prayer is that I will remember and live the lessons I learned from my ministry mentor, Mark Jackson.

John Greening is national representative of the General Association of Regular Baptist Churches.