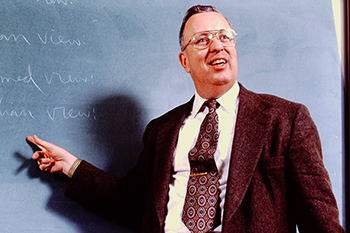 “Dr. Myron” did not simply teach theology; he was a true theologian in the fullest sense of that word. And as a theologian, he has had a significant impact on the theological convictions of Regular Baptist pastors and missionaries and on the Regular Baptist movement as a whole.

Myron’s academic credentials are quite impressive.

If you are counting, that’s three masters’ degrees, two earned doctorates, and one honorary doctorate. (And for the record, the old BD [bachelor of divinity] degree has been replaced today by the MDiv degree. So the BD degree is almost like another master’s degree.)

Did you also notice some of the more unusual institutions for a fundamental Baptist to attend? St. Stephen’s Course of Studies in Orthodox Theology. St. Thomas Theological Seminary. Concordia Seminary. Did Dr. Myron waver in his beliefs and look around for a place to land? No, not at all. He pursued degrees from schools of other theological persuasions so he could understand those beliefs.

Dr. Myron began his teaching career at Denver Baptist Bible College and Theological Seminary in 1971 and served there until 1983. There he taught mainly theology courses. In 1983 he moved to Faith Baptist Bible College to teach, first in the graduate program and then in the seminary when it opened in 1986. In the seminary he was chair of the Theological Studies Department and director of the MA in Theological Studies program until his retirement this year.

As you can tell by now, Dr. Myron was a man immersed in the study and teaching of theology. A list of the courses he taught at Faith shows his passion.

From time to time, Dr. Myron also taught advanced courses for the 10 major theology subjects (e.g., Advanced Bibliology, Advanced Christology, Advanced Eschatology). You can see his deep interest in theology and helping his students understand the truths of the Scriptures.

As you might guess, along with Dr. Myron’s passion for theology has come a passion for books. Probably no one knows how many thousands of books he has, but space has frequently been an issue. Dr. Myron never married (and may never have spent a lot of time in the kitchen), so rumor has it that when he lived in an apartment on the Faith campus, he used the oven to store some of his books.

In addition to his nearly 50 years of classroom teaching, Dr. Myron has helped people understand theology through his writings. Check out the Faith Pulpit articles at faith.edu for a list of his 33 articles. (In fact, he has written more Faith Pulpit articles than any other author.) You will see such articles as “The Active Obedience of Christ,” “The Importance of Justification,” “Distinguishing Law, Gospel, and Grace,” and “Reasons for Holding a Non-Charismatic Position.”

Perhaps Dr. Myron’s magnum opus is Law and Grace, published by Regular Baptist Books in 2011. This study of the book of Romans presents a dispensational framework for distinguishing the concepts of law and grace. Few, if any, books today set forth such a clear view of these important theological issues.

Dr. Myron’s earliest church connections were with a liberal Protestant church in his hometown of Schenectady, New York. Through the later influence of Dr. Bryce B. Augsburger, then pastor of Marquette Manor Baptist Church in Chicago, Dr. Myron became a Baptist with separatist convictions. He spent some time in separatist Conservative Baptist Association churches, but he saw the danger of allowing churches in that group to hold dual affiliation.

In keeping with his convictions, Dr. Myron looked for a seminary that held to Baptist and separatist convictions, and in 1966 he enrolled at Grand Rapids Baptist Seminary. While there he joined his first Regular Baptist church, Northland Baptist Church in Grand Rapids. Over the years he increasingly embraced the Regular Baptist position and held membership in GARBC churches in Dallas, Denver, and now Ankeny, Iowa.

In his May 2005 Baptist Bulletin article “Why I Am a Regular Baptist,” Dr. Myron explained why he identifies with the Regular Baptist movement. As you might expect, he does so because of the GARBC’s theological and separatist positions. He wrote, “I was not brought up in a Bible-believing home or church, but by God’s grace I heard the gospel and trusted Christ as my Savior. Through studying in various schools and being affiliated with Baptist associations, my convictions developed; and as a Regular Baptist, I proudly affirm the truths found in the Articles of Faith and Purpose Statement of the GARBC constitution.” In that article he specifically identified his appreciation for the GARBC doctrinal statements on baptism by single immersion, the universal church, the pretribulation Rapture, and the cessation of sign gifts.

Don Anderson has served the Lord at Faith Baptist Bible College and at the offices of the GARBC and Regular Baptist Press. He currently serves in the marketing and editorial departments at RBP.

Dr. Houghton has had an immense impact on my understanding of the Word of God. I was privileged to sit under his teaching, hear him preach the Word, and be around him in informal settings. He is a world-class theologian, at home in conversations with brilliant men across theological divides, and equally at home with wide-eyed students in a small class. He has the ability to wrestle with and grasp mind-boggling theological concepts and then communicate those challenging topics in terms that his students could understand. I remember thinking on more than one occasion after a Houghton lecture, “Why didn’t I think of that?” R.C. Sproul once said, “The great teacher helps his students gain understanding.” That describes Dr. Houghton—a great teacher because he made God’s Word clear.
—Stan Lightfoot, pastor of Rustic Hills Baptist Church, Colorado Springs, Colorado

Myron Houghton was a professor at Denver Baptist Theological Seminary when I met him in 1978. He became one of my professors when I enrolled the next year. I never saw more diplomas on one wall than he had in his office. Myron read all sorts of theologies, but then he also studied at all sorts of institutions. Consequently he had a remarkable, firsthand grasp of theological nuances. His passion for theological systems was contagious, as was his curiosity and his enthusiasm for charitable theological conversation. Myron took a personal interest in his students that endured after their graduations. Above all, he modeled Biblical conviction and personal devotion. I am grateful for what I received from him and rejoice to honor him as a friend and mentor.
—Kevin Bauder, research professor of historical theology, Central Baptist Theological Seminary, Plymouth, Minnesota

It is difficult to see how anyone could equal Dr. Myron J. Houghton in his pursuit of theological understanding from every major branch of Christendom. Dr. Houghton made this pursuit his life’s goal—that he might provide his students with firsthand information and deal fairly with any view that he presented in class. By this means, he is the embodiment of genuine Christian scholarship. Even if someone sought to pursue the study of theology with the rigor that Dr. Houghton has, the experience would still not be the same, because he would simply not be able to study under some of the legendary professors who influenced Dr. Houghton. I have sat under a number of excellent teachers in my academic career, but Dr. Houghton’s classes stand out as being some of those that I will cherish most of all. I was truly blessed to be his student (Luke 6:40).
—Paul Scharf, church ministries representative for the Friends of Israel Gospel Ministry, Columbus, Wisconsin

Dr. Houghton has always insisted that the origin and authority of his call to ministry was a gift from God and not something he earned from multiple academic degrees. He believed that his effectiveness as a teacher flowed from the fact that he was proclaiming the Word of God. He faithfully taught the truth with the goal of making disciples who would live the truth and proclaim the truth to others. He had a strong influence on so many students. One former student exclaimed after his ordination council, “I heard Dr. Houghton in most of my answers.” The words of 1 Corinthians 4:2 are appropriate to one who lived his life for the benefit of others. “Moreover it is required in stewards that one be found faithful.”
—Bernie Augsburger, representative of the Illinois-Missouri Association of Regular Baptist Churches and a lifelong friend of Dr. Houghton