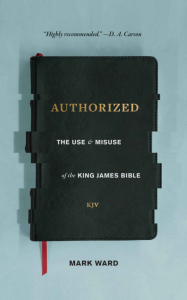 After all these decades of controversy over the King James Only movement, it’s hard to imagine anyone could have anything new to say. But Mark Ward has made a valuable contribution to the Bible translation issue with this book. Rather than wading into the minutia of textual criticism and the history of manuscript transmission, he offers a cogent argument for the superiority of modern Bible translations based solely on consideration of the KJV’s English. Ward convincingly demonstrates that not only is the KJV virtually unintelligible to modern readers in places where its Jacobean English is clearly archaic, but it is also unintelligible—and misleadingly so—in many places where its verbiage seems familiar to modern readers. That’s because many English words and expressions (“false friends,” Ward calls them) have undergone changes in meaning over the past four centuries, even though the words themselves are still used in modern English discourse.

While remaining deeply respectful toward the KJV and its laudable heritage, Ward calls for Christians to prize intelligibility in Bible reading and teaching. This is absolutely consistent with a high view of Scripture’s origin, character, and authority. Whatever your views on Bible translation, Authorized is well worth a careful read.

Tags: Book Reviews
Posted in Highlight on February 19, 2019.
SHARE ON: