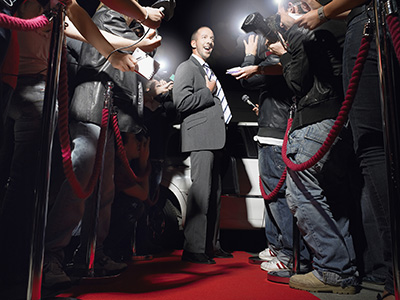 The voice of culture today is the celebrity. People are listened to not because of their qualifications to speak out on an issue, nor because they have something original and meaningful to say, but simply because they are famous. We are a people enamored with fame and fortune, and that directly influences whom we emulate, vote for, and pay attention to. And interestingly, it isn’t even necessary to do anything particularly noteworthy to achieve celebrity status anymore: Paris Hilton and the Kardashians have shown us that one can be famous simply for being famous! Welcome to a strange new world in which moms and dads routinely turn over the responsibility of parenting their children to Netflix, and a bad Jane Fonda movie can single-handedly determine US domestic energy policy.

And everywhere that culture went the church was sure to go. The church of Jesus Christ has always had a problem with imbibing the values and norms of the surrounding culture. That’s probably why the apostles were so careful to warn fledgling congregations to “not love the world” (1 John 2:15) and not to be “conformed to this world” (Rom. 12:2). But that is easier said than done. Believers have always struggled to maintain the proper balance between separating from yet remaining engaged with the world, and all too often we’ve erred on the side of conformity. The Corinthian Christians fell into the sexual immorality associated with the Corinthian worship of Artemis. The Philippian Christians prized the social stratification of Philippi. The Laodicean Christians sported an attitude of arrogant self-sufficiency, just as did their unbelieving countrymen. And many American Christians have become just a little too obsessed with celebrity status.

For a while the celebrity pastor syndrome (at least in its most dominant form) was most visible among Pentecostals and Charismatics, whose frequently flamboyant spokesmen included televangelists, faith healers, self-professed apostles, and shady miracle-workers. But the past few decades have witnessed the rapid multiplication of celebrity pastors among evangelicals and fundamentalists too. Today there is a whole class of celebrity pastors wielding enormous influence over the vast body of conservative American Christians. While hundreds of lesser-known pastors struggle to keep their church doors open week after week, celebrity pastors have more followers, listeners, and admirers than they could ever know what to do with.

In this article, I’d like to suggest several potential dangers that can result from the celebrity pastor syndrome. Of necessity, then, this discussion proceeds with broad-brush generalizations and sweeping characterizations. My intention isn’t to impugn any particular pastor, criticize the practice of listening to sermons on the radio or via podcasting, or foster a negative, critical spirit. It’s true that some “celebrity pastors” have proven to be faithful servants whose ministries have had a positive impact on the church. Nevertheless, I am concerned that our obsession with celebrity pastors has the potential to expose Christians to unhealthy trends that can often result in misplaced allegiance and a truncated understanding of Scripture. Specifically, those unhealthy trends include the undermining of local church sufficiency, the restriction of the Berean spirit, and a narrowing of instructional focus.

Baptists have always prized local church autonomy, but perhaps it is time we started emphasizing local church sufficiency too. The local church as a self-contained unit is (or should be) the primary source of spiritual growth for every believer. There we receive the Word together, worship the Lord together, and participate in the ordinances of the faith together. When ordered rightly and operated according to New Testament patterns, the local church is sufficient to supply the spiritual needs of all invested churchgoers. But isn’t that picture distorted just a little when Christians become enamored with the celebrity pastor of a megachurch in a different town or state and start turning to his sermon broadcasts as their primary source for Scriptural teaching? Doesn’t that have the potential to undermine (or at least erode) the perceived spiritual authority of their own pastor? And suppose the celebrity pastor holds different doctrinal distinctives than their local church. If Christians are listening to two different and differently aligned Bible teachers throughout the week, one of whom preaches to a flock of less than 200, while the other is regularly heard by thousands or even tens of thousands, who’s going to seem more credible?

Not only can enthrallment with a celebrity pastor threaten local church sufficiency, it can also downplay the competence of individual, ordinary Christians to read the Bible profitably by themselves. I have witnessed this phenomenon repeatedly on social media. A sincere, devout brother or sister will begin idolizing a particular well-known pastor or theologian, and soon that person’s teaching—rather than appeal directly to Scripture—seemingly becomes the measure of orthodoxy. “Chan/Platt/Washer/Osteen/Tripp said it, I believe it, that settles it.”

There’s something wrong with this picture. The Berean Jews, Luke tells us, were “more fair-minded than those in Thessalonica” because they “received the Word with all readiness, and searched the Scriptures daily to find out whether these things [that Paul was preaching] were so” (Acts 17:11). In other words, even the apostle Paul himself was to be critically evaluated against the yardstick of Scripture! And the individual, ordinary Berean Jews were evidently considered competent to compare Paul’s message to the sacred writings and to determine, on the basis of that careful study, the degree to which Paul spoke truthfully. But the celebrity pastor, aided by all the flash and polish of a slickly produced, well-lit, and well-funded media production, can be perceived as possessing an authority all his own. May we all evince the Berean spirit, carefully and critically evaluating all truth-claims by the standard of divine revelation, as we seek to know and love God more.

Typecasting is what happens when an actor or actress gets pigeonholed into a particular kind of role, so they end up portraying the same type of character over and over again throughout their careers. A similar phenomenon can be observed among many celebrity pastors. Doubtless for most it is unintentional, but over time the scope of their sermons tends to narrow until one theme or doctrine becomes the focal point. Maybe it’s the Lordship of Christ, or Young Earth Creationism, or God’s plan for national Israel, or delighting in God. In many cases, this truncating effect is readily apparent. John Piper, in a sermon titled “Let Your Passion Be Single,” furnishes a good (and refreshingly self-aware) example of this tendency within his own ministry:

And there it was, in one paragraph [by Jonathan Edwards]. Now this has been my project for about twenty years, to unpack that paragraph in sermon after sermon and book after book. I only have one thing to say. I say to people, “If you want to buy a Piper book, just get one. You don’t need the rest. I say the same thing in every book.”

All of the themes named above have their place. Within the context of the entire Word of God and its overarching metanarrative, all are contributory and all are important. But when one theme or element becomes a fixation, other equally important themes and elements receive insufficient attention and balance is lost. That’s why Regular Baptist Press has implemented a strategy for teaching all of Scripture, systematically and comprehensively, through our various resources and publications. Rather than allowing a hobby horse or two to occupy disproportionate space in our catalog, we endeavor to equip churches to expound Scripture in a way that is expositional, thorough, and balanced. Honestly, a commitment to verbal plenary inspiration demands nothing less.