As we enter a new era of GARBC history, we would do well to look back at the men whose lengthened shadows still influence us today. 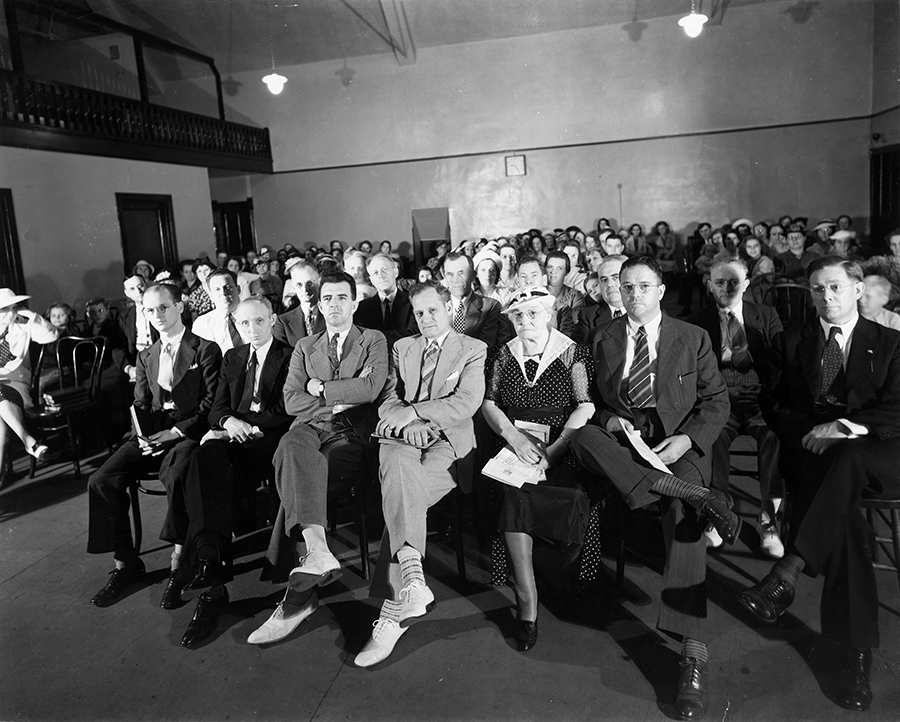 A Brief Overview of GARBC History

W. Van Osdel is not a household name among Regular Baptists these days, but he certainly played a significant role in forming the GARBC and deserves recognition along with other GARBC leaders. In fact, Kevin Bauder and Robert Delnay, authors of One in Hope and Doctrine (Regular Baptist Books), assert that he is “arguably the founder of the GARBC.” Van Osdel pastored Wealthy Street Baptist Church in Grand Rapids, Michigan, from 1909 to 1934. While in Grand Rapids, he became the acknowledged leader in the state for a strong separatist stand in opposition to the liberalism and apostasy of the Northern Baptist Convention. In 1928, four years before the GARBC began, he led in forming the Grand Rapids Association of Regular Baptist Churches.

Van Osdel was also instrumental in forming the Baptist Bible Union in 1923. The union was an organization of pastors who maintained a separatist, fundamentalist position. As the union began to wane, Van Osdel realized the need for a new association of churches, and he called fundamentalist leaders together to form that association. With Van Osdel working behind the scenes, the last meeting of the Baptist Bible Union in 1932 at Belden Avenue Baptist Church in Chicago was the first meeting of the fledgling GARBC. Bauder and Delnay observe that “the GARBC would quickly forget his name, but it would bear witness to his values for decades to come. While he never occupied any high office in the association, he molded its structure and shaped its policies. Perhaps his greatest achievement was to ensure that the fellowship was in the hands of capable leaders before he passed from the scene.”

The years 1932 to 1944 were ones of adjustment as the new association worked its way through many concerns, especially leadership matters. Because the men of the new association had been used to a structure involving a president and vice president, its leaders brought that same structure to the GARBC. The association elected Harry Hamilton president in 1932, followed by Earle Griffith in 1933 and Robert T. Ketcham in 1934. Ketcham was becoming more widely known among fundamentalists and was reelected president in 1935, ’36, and ’37. He feared, however, the president / vice president leadership structure and did not want the association to be all about one man, so in 1938 he proposed a council structure. The association’s churches heartily accepted the proposal and established the Council of Fourteen (later expanded to the Council of Eighteen). This adjustment period also brought an exciting development: the launch of the Baptist Bulletin in 1933.

The council structure worked well, but the growth of the GARBC showed the need for one man to devote full-time work to association matters. So in 1944 the Council of Fourteen called H. O. Van Gilder, pastor of Temple Baptist Church in Portsmouth, Ohio, to the role of national representative. Van Gilder was already well known among fundamentalists. In an earlier pastorate in Columbus, Ohio, he had led his church out of the Northern Baptist Convention and had helped found the Ohio Association of Independent Baptist Churches (now the Ohio Association of Regular Baptist Churches). After setting up an office in Chicago and hiring Ruth Ryburn as his secretary (who served until 1982), Van Gilder started traveling to represent the association. Paul Tassell writes that Van Gilder “set precedents and high standards for the office of national representative that are appreciated to this day.” Van Gilder served until 1948, when he became the president of Western Baptist Bible College.

The Council of Fourteen probably did not take too long in selecting the next national representative: Robert T. Ketcham. Ketcham had been a leader in the Baptist Bible Union and in the early days of the GARBC, serving as president from 1934 to 1938. He had pastored churches in Pennsylvania, Ohio, and Iowa. While in Ohio, he (along with Van Gilder) was instrumental in forming what is now the Ohio Association of Regular Baptist Churches. Though slowed by severe eye problems, Ketcham gave himself fully to the work of the GARBC. He provided wisdom and encouragement for churches leaving the Northern Baptist Convention, and his preaching, passion, and leadership brought the GARBC into a new level of influence in the fundamentalist movement. Failing health forced him to leave the office of national representative in 1960, though he remained the national consultant for six more years. His retirement tribute contained these words: “All of us are better Christians, better servants of our Lord, and better warriors in the holy crusade for Truth because of God’s rich bestowments upon him and through him.”

As the association grew, Ketcham and other leaders recognized the need for Sunday School literature that would present Bible lessons from the fundamental Baptist perspective. So the association established Regular Baptist Press, with the first materials available in 1952. In 1954 God brought a man to RBP who would make a major impact in the publishing world over the next three decades. The man was Merle R. Hull, who had pastored churches in Michigan and Iowa. Initially he served at RBP as a Sunday School consultant and writer, then in 1955 he became the executive editor of RBP and the editor of the Baptist Bulletin, positions he held with distinction until his retirement in 1987. God used Hull to build RBP into a strong, vibrant curriculum publisher that has remained a leader in producing high-quality, Biblical Sunday School materials and perpetuating Baptist fundamentalism.

When Ketcham’s failing health forced him to retire from the office of national representative in 1960, the council called Paul R. Jackson to the leadership role. Jackson had pastored churches in North Dakota, California, and Michigan. (Interestingly, in 1945 he was the interim pastor of Wealthy Street Baptist Church in Grand Rapids, a church formerly pastored by O. W. Van Osdel.) In 1946 Jackson became president of Baptist Bible Seminary, where he capably served for 14 years. During those years Jackson became increasingly active in the GARBC and was the council chairman in 1960 when he was called to be the national representative. Under his leadership the offices of the GARBC and RBP moved from downtown Chicago to a larger facility in Des Plaines, a northwest Chicago suburb. One of Jackson’s greatest contributions was writing the book The Doctrine and Administration of the Church, which has been a reliable guide for Regular Baptist churches since its publication in 1968. The book is now in its third edition and has been translated into several languages.

Whenever one man left the office of national representative, the Lord always had another man ready for the leadership role. Following Paul Jackson’s Homegoing in 1969, that man was Joseph M. Stowell, who had pastored in Michigan, Indiana, New York, and New Jersey. An early leader in the GARBC, he had served on the GARBC executive committee as far back as 1936 while pastoring in Gary, Indiana.

Stowell’s tenure in office was marked by growth and progress. In 1970 he initiated the GARBC radio broadcast, Living Reality, and was its primary speaker. In 1973 the association established Gospel Literature Services, led by Mike Riley, to send gospel literature to missionaries. (GLS is now called Regular Baptist Press International.) The growth of the association and RBP necessitated more space, so in 1976 the office moved to nearby Schaumburg, Illinois. In 1979 Stowell announced his retirement, sensing it was time to step aside. He remained active in other ministries after his retirement.

When Stowell stepped aside, God had already prepared the next man for the association’s leadership role: Paul N. Tassell. Tassell had a strong GARBC background. He had accepted Christ as his Savior at Emmanuel Baptist Church in Toledo, Ohio, under the ministry of Pastor James T. Jeremiah and surrendered his life to ministry at a Regular Baptist camp. After finishing his education, Tassell pastored Bethany Baptist Church in Galesburg, Illinois, and then Campus Baptist Church in Ames, Iowa. In 1970, after a fruitful ministry in Ames, he became the GARBC national youth representative, writing youth materials and traveling the country to speak in camps and youth rallies. In 1973 he accepted the call to become the pastor of Grandview Park Baptist Church in Des Moines, Iowa. When the Council of Eighteen looked for a successor to Stowell, it did not have to look far. Paul Tassell, who was council chairman at the time, was God’s man for the position. So in 1979 Tassell became the fifth GARBC national representative. During his years in office, he ministered, as he said, by the pulpit and the pen. Tassell traveled tirelessly across the country, speaking in churches, promoting the GARBC, and encouraging pastors. He also carried on an active writing ministry. His greatest writing contribution was his 423-page book, Quest for Faithfulness: The Account of a Unique Fellowship of Churches, published in 1991. Tassell served until 1994, when health issues forced him to retire from office.

In 1994, after Tassell’s retirement, the association found itself in a position it had not faced before—the need for an interim national representative to fill the office until the association could choose the next leader. Again God had a man ready for this position: Mark E. Jackson. Jackson, like Tassell, had a strong GARBC background. Jackson was the son of a GARBC pastor and national representative (Paul Jackson), attended Baptist Bible Seminary, and pastored GARBC churches in New York, Massachusetts, Washington, Michigan, and Iowa. He served on the Council of Eighteen and was president of Baptist Bible College and Seminary (now Clarks Summit University) from 1979 to 1986, and from 1986 to 1995 he served as the director of Gospel Literature Services. Who better to step into the interim national representative role than Mark Jackson. He guided the GARBC until the association called John Greening to the office in 1996.

John R. Greening, an eighth generation pastor who served in youth and senior pastorates for over 20 years, became national representative in 1996. He came into the role saying, “Together we can accomplish more,” and he successfully championed that approach during his tenure. Greening has now retired from the office of national representative after 22 years but has left the association an enduring legacy of spiritual leadership. He has quietly and effectively led us, pushed us, and focused us as an association. Because of John Greening, the GARBC has indeed accomplished more.

Each of these men has stood on the shoulders of the previous ones to cast an ever-lengthening influence on the GARBC. We are grateful to God for our heritage, and we look forward to the ministry of Mike Hess, who in his new role as GARBC national representative will help us accomplish even more.

Don Anderson, a lifelong Regular Baptist, has served the Lord at Faith Baptist Bible College and at the offices of the GARBC and Regular Baptist Press. He currently serves in the marketing and editorial departments at RBP.

Posted in All Current Issue Posts, July/Aug '18 Issue, The Baptist Bulletin Magazine on September 5, 2018.
SHARE ON:

Baptisms and Bibles at Churches in India