The Ultimate Future of Bible Colleges 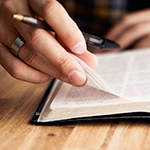 It is estimated that more than 50 percent of all Protestant missionaries in the 20th century were Bible college graduates. Even if every Bible college were to close its doors today, the continuing impact of the movement would be felt long into the future—into eternity, in fact. The impact of the Bible college movement “has been felt in every part of the world, producing a large percentage of North American evangelical missionaries and serving as a primary educational enterprise for local church development,” says the Association for Biblical Higher Education. But what is the future for the Bible college movement?

The late 19th century was a period “when the philosophy of naturalism became prevalent in American education.” During that era, and not coincidentally, “a movement began that has had a profound influence on evangelical Protestantism,” explains the ABHE website. “This religious development was the Bible institute movement, which later evolved into the Bible College movement.”

Posted in All Current Issue Posts, Sept/Oct '14 Issue, The Baptist Bulletin Magazine on September 2, 2014.
SHARE ON: