Stay by the Stuff

The ministry of J. O. and Juanita Purcell 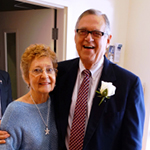 On Dec. 31, 2014, J. O. Purcell retired from pastoral work for the second time. It was the culmination of five decades’ worth of ministry for the Purcells. The number of lives that have been touched and transformed through J. O.’s preaching and Juanita’s teaching and writing ministry are beyond count. Theirs has been a ministry driven by the impassioned desire to exalt Christ in all things. They have labored tirelessly, fought the good fight, and finished the course.

Looking back, J. O. recalls a word of exhortation he received during his training for the ministry. The place was Moody Bible Institute. The speaker was William Culbertson III, president of the school. Standing before a group of students he said, “Young people, you’re off to a good start. You’ve got good teachers and families that have sent you here to learn the Word of God. I encourage you: finish well. It’s one thing to start well, another thing to finish well.” Culbertson’s words made an indelible impact on J. O., and he determined to endure to the end for Christ. Fifty years later, after a lifetime of vibrant, Christ-centered vocational ministry, it is clear that he has accomplished this goal. J. O. Purcell is a model of starting, running, and finishing the race well.

From its very beginning, J. O.’s Christian life has been characterized by an almost restless eagerness to serve the Lord. “Dad, I want to get saved,” a 9-year-old J. O. told his father one Sunday morning. “No, you’re too young,” came the reply. Earlier in the week his older sister had made a decision to trust Christ as Savior, and now J. O. wanted to do the same. But his father was concerned that he might be too young to understand the weighty issues involved. So, in deference to his father, J. O. managed to wait a whole week before taking the plunge. The next Sunday morning, as soon as the pastor gave the invitation, J. O. stood to his feet and walked the aisle. “I’m not waiting any longer,” he said to himself as he knelt and asked Jesus to save him from his sins.

Fourteen years later, J. O. found himself waiting again—this time on his wife, Juanita. As he spent more and more of his time studying God’s Word, J. O. began to feel called to full-time ministry. Juanita was less than pleased. “No way,” she said. “I didn’t marry a preacher and I’m not going to live with one.” It wasn’t that Juanita harbored any deep-seated rebellion against God; it was just that she couldn’t imagine herself as a pastor’s wife. “She didn’t play the piano and she didn’t sing, so she just didn’t know what in the world she would do,” J. O. recalls. “All she’d ever done was serve in the nursery, so the thought of being a pastor’s wife terrified her.”

But J. O. hadn’t been deterred from making a decision for Christ all those years earlier, and he wasn’t about to give up on the dream of vocational ministry now. He turned for insight to his pastor, who counseled him, “God’s called you, J. O. And if God has really called you, you just be patient and prepare yourself, and in time God will call your wife.” For five years J. O. waited for God to change Juanita’s mind about the ministry. In the meantime he found other ways to serve. With his pastor’s blessing he began teaching an adult Sunday School class and serving his church as a deacon. Finally, his waiting paid off. In a brief span of time, Juanita narrowly escaped serious injury twice in near-miss automobile collisions. The second time, she felt that God was trying to get her attention. He’d gotten it. “Okay, J. O.,” she said, “I’d better stop being contrary. If God has really called you to the ministry, I’ll support you.” With Juanita finally on board, J. O. moved quickly. He immediately enrolled at Moody Bible Institute, eager to begin a life of service to Christ.

“Hey, J. O., why don’t you take that little church over in Romeoville and pastor it?” Still a student at Moody, J. O.’s passion for ministry had already begun to attract attention. The church in question was Romeoville Bible Baptist Church, a struggling congregation of just eight adults and 30 children. The church, desperately in need of revitalization, was seeking a new pastor. The challenge must have seemed daunting, and no doubt many ministerial students would have balked at the prospect of such a tough assignment. But not J. O. “Well, why don’t you tell somebody that I’d love to?” he replied.

It wasn’t long at all before J. O. and Juanita were leading the church toward massive growth. They served at Romeoville Bible Baptist from 1964 to 1978, during which time the congregation’s rapid expansion required them to build four new buildings and an auditorium capable of seating 1,200. In 1972, the Purcells also led the church in launching a Christian school, Bible Baptist Christian Academy (renamed Romeoville Christian Academy in 2008). It was during these years that Juanita first took an interest in women’s ministries. Her successful women’s luncheons and Bible studies paved the way for a thriving writing ministry. Her first book, Trials—Don’t Resent Them as Intruders, was published by Regular Baptist Press in 1991. Juanita has been a regular, best-selling contributor to RBP’s women’s Bible studies and other product lines ever since and, with J. O, wrote How to Stay Sane When Life Doesn’t Make Sense in 1999.

It seemed J. O. Purcell possessed the “Midas touch” of ministry. When he and Juanita left Romeoville Bible Baptist in 1978, it was flourishing. Their second church was Heritage Baptist Church of Lakeland, Florida. Once again, the challenge must have seemed formidable: Heritage had been formed after a church split, and the congregation was hurting. But the Purcells’ ministry in Lakeland was just as successful as it had been in Romeoville. Over the course of the next 18 years, they built the church up from a congregation of 78 people meeting in a rented facility to a body of over 800 with its own multibuilding campus.

On J. O.’s first Sunday at Heritage, Joseph Stowell II, then national representative of the GARBC, visited the church. “I believe God has placed you in a unique position,” Stowell told J. O. after the service. “With Spurgeon Baptist Bible College so close by, this could be a real recruiting station for missionary ministry.” J. O. took this advice to heart and made enlisting young people for service to Christ a major ministry focus. Throughout their years at Heritage, the Purcells saw 14 families dedicated to Christian service and sent into the mission field. The church’s emphasis on missionary recruitment remains one of its most defining characteristics to this day.

When J. O. and Juanita retired from Heritage Baptist in 1996, they thought their time in pastoral ministry was done. J. O. spent the next five years serving part-time as the state representative of the Wisconsin Association of Regular Baptist Churches. Then in 2002, Dave Marshall, former president of Evangelical Baptist Missions, asked them to consider starting a new church in The Villages, Florida. At first they were reluctant to do so (“We’re too old for that,” Juanita quipped). But after prayerful consideration, they decided to climb into the proverbial saddle one more time. Tri County Baptist Church was founded in December 2002 with just 11 charter members, including the Purcells. Clearly, J. O. and Juanita were not too old for pastoral ministry just yet: over the next 12 years they led the church through a period of consistent, steady growth. Today the congregation is over 450 attendees strong and meets in its own facility, which was completed in January 2008.

There can be no doubt about it: J. O. and Juanita Purcell have finished well. During their five decades in vocational ministry they have seen the kind of fruit that many only dream of. But their success wasn’t the result of clever marketing ploys, church-growth gimmicks, or administrative wizardry. They just poured their energy into Christ-centered, doctrinally uncompromised, expository proclamation of Scripture, and God gave the increase. “My focus in ministry has been eightfold,” J. O. says. “Exalting Christ, enjoying Christ, evangelizing for Christ, edifying believers in Christ, encouraging believers for Christ, exhorting believers for Christ, enlisting believers for service to Christ, and enduring until Christ comes.” It seems like such a simple formula, but as the Purcells have seen time and time again, it is precisely this kind of Christ-exalting, Bible-proclaiming ministry that God delights to honor.

After we discussed his lifetime of ministry, I inquired of J. O., “If you were asked to give just one word of counsel to the GARBC for the days ahead, what would it be?” His answer was profound:

Stay by the stuff! Be careful to not leave the foundations on which we’re built. I have been pondering Ezekiel 22, when God sought for a man to stand in the gap, but found none. I see such a tendency to drift and not stand by the traditions of our faith that are so crucial, and the practice of separation from the world. I don’t know how that could be stressed enough; it seems that so many churches are so longing to be like the world. And not to stay by the stuff.

Wise counsel. May God be pleased to send the GARBC more servants like J. O. and Juanita Purcell for the years to come, servants who will labor to “stay by the stuff” and to exalt Christ in all things.

Sunday School curriculum and coronavirus-prevention supplies are benefiting churches in Malawi both spiritually and ...more

The Jesus film has been a very effective tool to share the gospel in many countries of ...more

A ministry that partners with Regular Baptist International sends a plea for prayer after a tragedy. The name of the ministry is being withheld due ...more