Partners of the IPFBM convened Nov. 6–10, 2017, in Tagaytay, Philippines. The venue, the Tagaytay Retreat and Training Center, is a Christian ministry that rents its beautiful facilities to Christian groups for retreats and conferences. The staff served the conferees joyfully, and the food was excellent. Seventy guests representing IPFBM partnerships from nine countries attended, interacting around the church planting theme “Global Construction Zone.” A banner across the front of the auditorium highlighted the conference’s four goals: to strengthen relationships among IPFBM partners, to provide instruction in church planting strategies, to equip pastors and associations with resources, and to encourage the IPFBM partners to work together.

The daily program included preaching sessions, a three-part doctrinal overview, workshops on specialty topics, and a track of instruction. Clare Jewell, national church planting coordinator for Regular Baptist Churches, offered a track on church planting and a three-part series on the dynamics of cross-cultural outreach. Jim Vogel, executive director of the Northeast Fellowship, taught a track on practical helps for pastors and a three-part doctrinal series. The ladies met six times with Jim’s wife, Jeannie, to consider meaningful issues that women face.

When ministry leaders from around the globe discover counterparts from another continent who share the same values and do similar ministries, they are all encouraged. Face-to-face fellowship and hand-in-hand prayer times empower them as fellow soldiers of the cross. Since some of these men have never been out of their countries before, the interaction they experience is like a taste of Heaven. What a joy it was for me to see our Indian brothers praying with Africans, and Burmese and Bangladeshis leading Americans to the throne of grace. It is a foretaste of the celebration of praise in Revelation 7. 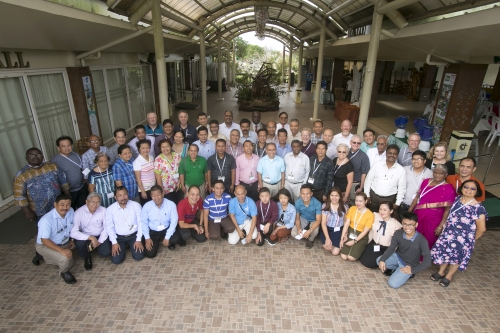 The All-Partners business session included electing members to the Council of Eight. A council term is four years. Newly elected council members are Paulo Bondezan of Brazil, Prasad Sakile of India, Ajoy Mitra of Bangladesh, Jesse Quapourlee of Liberia, and Timothy Mang of Myanmar. Reelected from the previous term are Cyrus Wanyonyi of Kenya and Reuel Lumilang, a Filipino missionary in Thailand who will serve as the council chairman. I was also reelected and will serve as vice chairman. Each council member expressed both humility and excitement concerning his responsibility of serving.

The first order of business for the new council will be to review and vet two IPFBM applications. An association of 500 Baptist churches in Zambia, Africa, is pending review, and an association in Malawi, Africa, has submitted an application. To join the partnership, an association must submit an application, along with the doctrinal statement and an overview of the history of the association. Each Council of Eight member reviews the documents and submits his response to the chairman.

Keeping in mind that the IPFBM is a network of independent Baptist church associations, the council makes its decision for accepting an association based on that association’s doctrinal compatibility, separation from charismatic or liberal organizations, and a commitment to the Great Commission. While an association may receive a preliminary acceptance, the council’s final decision requires a visit and recommendation from a council member. Early in the partnership’s formation, a visit was not required. However, the council learned that documents don’t tell the whole story. After some visits, the Council of Eight has had to dismiss associations for practices found to be inconsistent with their applications.

The 2017 conference faced some unusual challenges. Surprisingly, the Philippine embassy rejected any visa that indicated the person’s intention to attend a religious conference. Several people from India and Bangladesh who had planned to attend were refused. Though the embassy’s reason was not clear, it appeared that the religious war on the southern island of Mindanao caused the embassy to be more restrictive. Though the number of guests attending the conference was lower than anticipated, the conferees’ evaluations showed they were not at all disappointed in the event.

In addition to Clare Jewell, Jim and Jeannie Vogel, and me, those who preached or led workshops included H. C. Stephen of India, Philip Fernandez of the Philippines, Hoi Cung Tum of Myanmar, Cyrus Wanyoni of Kenya, Joshua Abedu-​Kennedy of Ghana, and Chris Brown of the United States. One speaker, J. D. Enosh of Bangalore, India, had been refused a visa, so Kirk Wesselink, pastor of Desert Hills Baptist Church, Albuquerque, New Mexico, capably stepped up to speak in his place. In addition, Prasad Sakile of Andhra Pradesh, India, had been scheduled to lead a workshop, but his visa application was also rejected.

Essential to any conference, especially one overseas, is a local committee led by a logistics chairman. Maymon Sarnicula, pastor of a Baptist church in Dasmarinas, Philippines, proved to be an extraordinary chairman. He faced incredible challenges providing transportation from three disconnected international terminals to the venue up to nearly two hours away. And with conferees bringing their own currencies from their respective countries, the registrars had to be competent. The local committee also printed the conference materials, created large banners, and promoted the conference on social media and at other conferences. Pastor Maymon drew upon local church musicians to wonderfully lead worship. He also coordinated a two-day post-conference tour of Tagaytay and Manila for 21 conferees.

The night following the All-Partners Conference, my wife, Deb, and I flew to Hong Kong to participate in the Kids4Truth Clubs translation venture. A year ago, I joined Bob Roberts in Hong Kong and Shanghai. I was there in my role as director of Regular Baptist Press International, and Bob, who created Kids4Truth Clubs, served as coordinator of the China division of Regular Baptist Press International. Bob recruited a team of 30 professionals from one church in Shanghai to voluntarily translate the Kids4Truth Clubs ma​terials into simplified Chinese characters for Mandarin Chinese speakers.

On this year’s trip, Bob, Deb, and I were accompanied by Darrell Goemaat, photography director for RBP. The four of us met with the translation team in a Shanghai coffee shop after its closing time. The team had been organized into groups, each with a leader. The project coordinator is keeping all the teams on a time line; their target date to complete the translation phase was Jan. 1, 2018. Bob and I spoke to the group, thanking them for their service and motivating them in their work. Listening to the group, Bob and I heard each member’s commitment to this project. All of them hold demanding jobs, meaning that the laborious hours of translation extend an already taxing workday. One translator told how her team leader had set a deadline that she worked into the wee hours of the morning to meet.

The initial decision to pursue this project came out of interviews Bob and I conducted in Hong Kong last year with pastors, publishers, and bookstore managers. The consensus was that the Kids4Truth Clubs materials should be translated into Chinese and produced in a side-by-side English-Chinese format. Twelve hundred evangelical churches, plus private schools, make up the potential market. On our recent visit in Hong Kong, Bob and I met with Billy Mulligan, a Christian and professional videographer. He conducted on-camera interviews with a Chinese pastor and teachers, plus Bob, Deb, and me. Billy will produce a marketing video to promote sales throughout Hong Kong.

While profit is never the chief motivation for such a project, the potential for profit opens an opportunity that excites Hong Kong church leaders: the profits will be used to produce and freely distribute this theology-based kids’ program through the house churches on the mainland. Christianity is spreading rapidly in China, but discipleship is the greater challenge. Kids4Truth Clubs will concentrate Bible truth on the upcoming generation of Chinese. What could be more strategic than Biblically grounding the children of the most populated country on earth!

Next post The Well, the Watercooler, and the Web