In the city of Batavia, New York, Pastor Don Shirk and Deacon Frank Klimjack of Grace Baptist Church have formed a tag team to train their local police department. Don is the department’s chaplain, and Frank, one of its police officers.

When the department needed a new location to hold its training, Frank thought of the perfect place—the activity center at Grace Baptist. So now he and Don “tag team” the training. For one week at a time, Frank leads a group of officers in defensive tactics courses, while Don leads the officers in professional development workshops.

Don has been pastor of Grace Baptist for 30 years. He became the police department’s first chaplain in May 2000 after receiving basic training with the International Conference of Police Chaplains. After five years as a chaplain, he achieved senior status. He credits ICPC with providing excellent training in understanding the unique world of law enforcement.

He describes the role of police chaplaincy as a presence, not a force, telling the officers, “Consider me another tool on your duty belt.” They are free to contact him at any time, either in a work crisis or with a personal need. He is called on mostly in suicide cases and death notifications.

Soon after his appointment, Don began participating in the department’s firearms qualification weeks. Seeing the downtime during lunch as a golden opportunity, he suggested that the chief allow him to provide lunch for the officers and then present a professional development workshop on practical topics related to their work. The chief approved. Don’s workshops have covered subjects such as stress, anger, leadership, and God’s view of lethal force.

Conducting the professional development workshops gives Don a platform for getting to know the officers and connecting with them.

At first, he was careful not to come on too strong and risk being labeled a Bible thumper before the officers got to know him. “I simply taught concepts in a relevant way that resonated with [the officers] and would say, ‘And by the way, this is exactly what the Bible says when . . .” Now that he is friends with many of them and has an established presence as the department chaplain, he can be more forthright.

Don often prefaces his remarks from the concept of law. He says that officers are responsible to uphold the directives of the law because it is right and good and needed. Likewise, God has given us directives that are right and good and needed. “They get that,” he says. He loves speaking truth to the officers, and views his times with them as opportunities of spiritual seed planting.

And that’s where his teammate comes in. 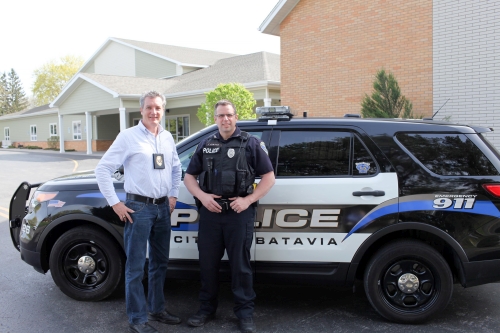 Before his salvation, Frank Klimjack thought of himself as a tough guy: he was a cop, a military veteran, and a paratrooper. He didn’t need Jesus, he thought.

When he transferred to the City of Batavia Police Department in 2001, he met Don. Frank thought having a police chaplain was nice, but he wondered what the guy did. Frank also noticed the chaplain’s demeanor and confidence while interacting with members of the department. Seeing the chaplain’s proficiency at the firearms range didn’t hurt: “He immediately gained my respect,” says Frank.

Over the years, Frank and Don had what Frank calls a professional relationship. “I respected him as a man, in his role as the police chaplain, and I thought that his professional development workshops were excellent and relevant to the needs of the officers. However, because of my worldly viewpoint, I had no need for the ‘Jesus’ part of his message.”

Frank’s wife, Kelly, wasn’t so stubborn, he says. “She saw her need for Christ and surrendered to Him in 2007.” Four years later, she was diagnosed, for the second time, with breast cancer. Frank expected her to be a wreck. Instead, she remained calm and steadfast. Watching in amazement, Frank wondered what was keeping her strong and calm.

Kelly underwent what Frank describes as a long season of treatment and multiple surgeries. “By the grace of God and His healing hands, Kelly made a full recovery,” he says. It was during those long moments in the hospital that the Holy Spirit started working on his heart.

After attending a Christmas cantata with Kelly, Frank felt compelled to meet with Don, who happened to think Frank was the last guy who would turn his heart to the Lord. But during their meeting, that’s exactly what Frank did. Don says discipling him was a pastor’s dream. “He had a voracious appetite for truth. Each week he came with his homework completed and moved from the basics of the Christian life to Ryrie’s theology.” A few years later, Frank became a deacon at Grace Baptist, where he also leads an Adult Bible Fellowship class.

Frank trains police officers using the SPEAR System. Frank describes the system as a study of human movement as it relates to violence, fear, and aggression. “The SPEAR System is ‘behaviorally inspired and genetically wired,’” says Frank, quoting Tony Blauer, who developed the system. Now that Frank is a Christian, he knows who hard-wired into humans that desire to survive a violent ambush.

He also sees parallels between defensive tactics and Christianity. “In law enforcement and military training circles, it is often said, ‘We don’t rise to the level of our expectations. We fall to the level of our training’ (Archilochus). As Christians, if we aren’t developing our relationship with our Father through prayer and being engaged in His Word, which I consider His training manual for us, what ‘training’ will we fall back on when evil ambushes us?” he asks.

Frank says that law enforcement officers desire to “act as the sheepdog for the flock, always on watch for the wolf,” but they’re also skeptical of accepting anything at face value that comes from outside their group. So Frank integrates two Biblical truths into all his training: how God designed humans with the ability to defend themselves and how even Jesus recognized that the world can be a dangerous place; therefore, there is a true need for self-defense (Luke 22:36). Depending on the topic Don presents during his workshops, if Frank can integrate it into his training session, he will. “This way,” he says, the officers “first hear Biblical truth from Pastor Shirk, and then they hear it from a fellow officer.”

Batavia’s police chief is grateful for the training both Frank and Don provide. He regularly thanks Don when the church hosts this training because it meets a real need for the department.

This pastor-deacon tag team of training has opened the door for Grace Baptist Church to reach out to the Batavia police department in other ways. For example, after two children were killed in a tragic fire in 2016, the church hosted a critical incident debriefing attended by several departments of first responders.

Other police officers, members of the sheriff’s department, and probation officers attend Grace Baptist. Don credits Frank’s testimony: “Word gets around. And having a man’s man like Frank unashamedly living for the Lord brings credibility and is a positive testimony.”

The church periodically hosts men’s breakfasts on Saturday mornings. Don invites officers who are on that shift. “They love attending the breakfast!” he says, adding that the breakfasts “are really good.” Staying to hear a brief challenge from God’s Word, the officers see Chaplain Shirk in his role as Pastor Shirk, challenging the men to live for Christ, love their wives, and lead their families spiritually.

As a senior officer, Frank is looked up to by the younger officers. So having someone like Frank invite them to the men’s breakfasts and attend with them removes their hesitancy. “The seed of the gospel is being planted!” says Don.

For Don, the chaplaincy is “a very privileged platform that I don’t take for granted.” For Frank, ministering with Don is a unique platform for exposing fellow officers to the truth of God’s Word.