Neil Gorsuch and the Future of Religious Liberty

On April 10, Neil M. Gorsuch was sworn in as an associate justice of the United States Supreme Court, bringing the nation’s highest court to full strength for the first time since the late Justice Antonin Scalia passed away last February. 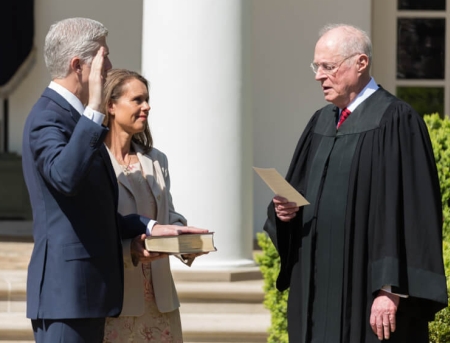 On April 10, Neil M. Gorsuch was sworn in as an associate justice of the United States Supreme Court, bringing the nation’s highest court to full strength for the first time since the late Justice Antonin Scalia passed away last February.

Gorsuch’s arrival to the Supreme Court comes at a pivotal moment for religious conservatives, as a potentially landmark religious liberty case, Trinity Lutheran Church Columbia, Inc. v. Comer, will be decided this term.

Justice Gorsuch’s whirlwind confirmation journey reveals the extraordinary partisanship that has gripped Washington but, further, represents the significance of a lifetime appointment to the nation’s highest court.

Because of lifetime tenures, appointments to the Supreme Court are consequential. They are forever tied to the legacy of the president who appoints them, but a justice’s significance extends beyond a single president’s legislative agenda. In recent years, as Congress has deadlocked on advancing major legislation, justices increasingly have weighed in on matters of public policy. This means that the job of deciding today’s pressing cultural issues has largely fallen to the courts. This was epitomized in the 2015 Obergefell v. Hodges decision, which legalized same-sex marriage. Although 40 million Americans in 31 states had voted to define marriage as between one man and one woman, five unelected justices redefined marriage to include same-sex couples

Following Justice Scalia’s death, the reality of a Supreme Court vacancy set off a political firestorm. On the campaign trail, voters listed the vacancy as one of their most pressing concerns. This was noted by Senate Majority Leader Mitch McConnell (R-KY), who shocked most observers when he announced—within an hour of Scalia’s passing—that the Senate would not confirm a replacement until after the 2016 presidential election. At the time McConnell said, “The American people should have a voice in the selection of their next Supreme Court justice. Therefore, this vacancy should not be filled until we have a new president.” At the time of Scalia’s passing, only two states, Iowa and New Hampshire, had voted. On the Republican side, Donald Trump and Ted Cruz had split the early contests, whereas on the Democratic side, Bernie Sanders and Hillary Clinton had each notched a win. With no clear nominee for either major political party, McConnell’s decision was viewed as risky.

On March 16, 2016, President Barack Obama appointed Judge Merrick B. Garland, the chief judge of the U.S. Court of Appeals for the District of Columbia, to replace Justice Scalia. Many viewed Garland, 63 at the time of his nomination, as a moderate pick. With Garland being older than the average appointment to the court, President Obama hoped the judge would garner support from Republican senators who had previously praised him. But McConnell held fast and refused to hold hearings. Following Donald Trump’s unexpected victory in the Republican primary, this hardline stance was second guessed. As Trump struggled on the campaign trail and national polls indicated a probable general election win for Hillary Clinton—someone seen as likely to nominate a younger, more liberal justice—Republicans began quietly wondering if Garland should be confirmed.

Thus, in retrospect, Mitch McConnell’s political calculus to hold the line is perhaps one of the boldest decisions in modern American politics. Despite a historically unpopular nominee, McConnell held fast. Indeed, his decision contributed to President Trump’s victory by energizing evangelicals concerned about the court’s impact on social issues. National exit polls reflect that 21 percent of voters said the Supreme Court was a major influence in how they voted. And for himself, President Trump campaigned hard on judicial nominations, promising to appoint a justice “in the mold” of Justice Scalia. In an unprecedented move, Trump promised Christians that his nominees would be “pro-life” and come from a list of 21 candidates approved by conservative think tanks.

This is the relevant background for understanding the brouhaha surrounding Justice Gorsuch’s recent confirmation. Although he was confirmed unanimously by the Senate in 2006 as a judge for the U.S. Court of Appeals for the Tenth Circuit, Gorsuch’s nomination was filibustered by Democrats. Their use of the filibuster marked the first time a partisan filibuster had ever been used on a Supreme Court nominee. Although three Democrat senators joined the Republicans, the majority was still short of the 60 votes needed to close debate and advance the nomination to a final vote. This prompted Republicans to invoke the so-called nuclear option and lower the threshold on Supreme Court nominations to a simple majority vote. This was the tactic employed in 2013 by then–Senate Majority Leader Harry Reid (D-NV) for all lower court appointments. Following the rule change, Neil Gorsuch was confirmed on April 7 by a 54–45 vote.

The Next Religious Liberty Case

How will Justice Gorsuch affect the Supreme Court and the way it decides religious liberty cases? It won’t take long to find out. On April 19, oral arguments were heard in Trinity Lutheran Church v. Comer, a significant religious liberty case with potentially wide-ranging implications. To summarize, Missouri has a grant reimbursement program that provides repurposed tire scraps for children’s playgrounds. The program is open to all nonprofits, and neutral criteria, such as how many kids play on a playground, are used for determining who is chosen to participate in the program. Trinity Lutheran Church, which runs a preschool and daycare center, applied for a grant in 2015. Despite placing fifth among 44 applications, Trinity’s application was denied because of its status as a church. The state argued that language in Missouri’s constitution prohibits the state from directly or indirectly aiding a church. Alliance Defending Freedom, representing the church, has responded by arguing that the state is violating the First Amendment of the United States Constitution by committing religious status discrimination and that Christian, Jewish, and Muslim children should have access to the same benefits—safe playgrounds—whether they attend a secular or a religious school.

Thus the underlining question before the court is whether the state government can exclude an otherwise eligible entity from a public benefit due to its religious affiliation. Three dozen other states have such provisions in their state constitutions. In light of this, the court’s decision could have significant implications. A decision is expected to come in June.

Where does Justice Gorsuch stand broadly on religious liberty, and do his previous decisions indicate how he might vote on the case now before him?

Looking at Gorsuch’s history on religious liberty, there is reason to be optimistic. In 2013 he sided with religious employers who claimed religious liberty infringement under the Affordable Care Act (Obamacare). In Hobby Lobby v. Sebelius, Gorsuch’s court, the Tenth Circuit, ruled that the federal government could not coerce business owners with sincerely held religious beliefs to provide insurance coverage for contraceptives that terminate life.

In addition to the Hobby Lobby case, Gorsuch wrote the majority opinion in Yellowbear v. Lampert (2014), a little-known but important religious liberty case. In his decision, Gorsuch sided with the plaintiff, Andrew Yellowbear, a Native American who sued the Wyoming Department of Corrections for refusing to grant him access to a sweat lodge. Yellowbear argued that this refusal prevented him from exercising his faith. Gorsuch agreed, finding that Yellowbear’s religious rights had been violated. Noting that applicable law regarding religious belief protects more than just the right to hold religious belief in private, Gorsuch explained that the law protects religious exercise. He explained, “Even if others of the same faith may consider the exercise at issue unnecessary or less valuable than the claimant, even if some may find it illogical, that doesn’t take it outside the law’s protection. Instead [the law] protects any exercise of a sincerely held religious belief. When a sincere religious claimant draws a line ruling in or out a particular religious exercise, ‘it is not for us to say that the line he drew was an unreasonable one.’”

Because religious liberty cases are often dismissed as pleas for “Christian privilege,” the Yellowbear decision reveals that Justice Gorsuch understands the underlying issues involved in the rights of religious exercise and conscience. Decisions like these give hope that Justice Gorsuch will begin his tenure on the Supreme Court by siding for the religious liberty of Trinity Lutheran Church, and by association, all Americans who seek to live in accordance with their sincerely held religious beliefs.

David Closson is a doctoral student at The Southern Baptist Theological Seminary and a frequent contributor for The Resurgent.

Posted in All Current Issue Posts, May/June '17 Issue, The Baptist Bulletin Magazine on May 25, 2017.
SHARE ON:

Next post Why Your Pastor Should Consider a Military Ministry