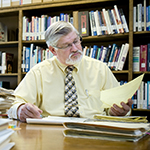 The phrase sounds like marketing hype, but “long overdue” is an apt description for One in Hope and Doctrine, released this June by Regular Baptist Press. Coauthors Kevin Bauder and Robert Delnay have partnered together to produce a definitive history of Baptist fundamentalism (1870–1950), tracing the development of the Northern Baptist Convention and its quick fragmentation into several separate branches.

Long overdue? Kevin Bauder pitched his “biography of O. W. Van Osdel” to RBP’s Merle Hull back in 1984. Bauder had just finished his ThM dissertation for Denver Baptist Theological Seminary and was interested in publishing his research on an early GARBC leader, the former pastor of Wealthy Street Baptist Church in Grand Rapids. Nearly 30 years later I found the Bauder letter in our production archives, filed neatly with an editor’s polite response. At the time, RBP wasn’t convinced that a Van Osdel biography would interest our audience.