After a nearly two-year process, the GARBC Resource Center relocated on May 4. 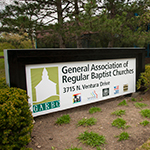 Staff members of the GARBC Resource Center gather outside the entrance of 1300 N. Meacham Road in Schaumburg, Illinois, at 3:00 on a Friday. It’s the last day they are working at this location, and John Greening, GARBC national representative, has assembled everyone to pose for a photo. Inside, bright orange plastic crates packed with employees’ belongings are stacked up to four-high in hallways, bookshelves stand empty of their research materials, framed photos capturing compelling moments in GARBC history have been removed from walls. The building is nearly empty. On the following Monday, employees would meet at their new home—3715 N. Ventura Drive in Arlington Heights.

After a nearly two-year process, the GARBC Resource Center relocated on May 4. From the sale of the former building to the purchase of the new one, “God went before us every step of the way,” says Michael Nolan, chief financial officer and treasurer for the GARBC.

Changing with a Changing Landscape

About 40 employees staff the Resource Center. Most of them are on-site, but they all serve in the association’s various ministries: Regular Baptist Press, International Partnership of Fundamental Baptist Ministries, Gospel Literature Services, Baptist Builders Club, Regular Baptist Chaplaincy Ministries, and Talents For Christ. The GARBC itself is the fellowshipping association of about 1,200 churches.

The Resource Center had been located in Schaumburg since 1976, when the office moved from Des Plaines, Illinois, to a larger facility on Meacham Road. At that time, the Schaumburg building “was surrounded by open land,” the September/October 2013 Baptist Bulletin relates. “Local families still kept horses at the boarding stable” just a few miles north of the office. Today Meacham Road is a prime transportation corridor in Schaumburg’s economic district, making the Resource Center “worth more to a real estate developer than it [was] to the GARBC,” Nolan says.

Recently the property became even more desirable to developers when Schaumburg officials rezoned the area to a retail/commercial designation, although they allowed the Resource Center to keep its zoning as planned manufacturing. But “as soon as they rezoned [the area], the GARBC switchboard started blinking like a Christmas tree,” Nolan says. “We had commercial retail developers calling left and right.” As Greening says, the Resource Center “is not our home”; it’s only a building. “We have fond memories of ministry in a functional facility. But nostalgia is not enough to sustain a viable organizational future.”

A few days before the 2013 GARBC Conference in Dearborn, Michigan, a developer presented a letter of intent to purchase the property. The offer was not unexpected. “Understanding the retail development around the Schaumburg property, the Council had been discussing this possibility off and on for several years.” Relocating would enable the association to pay off its existing mortgage and net a significant profit.

As required by the GARBC Constitution, the Council of Eighteen presented a proposal to sell the property and relocate. Church members and staff attending the conference unanimously voted their approval in a business session on June 25.

Sale of the property moved forward, but as the January 2015 closing date neared, the developer failed to secure finances for the purchase. However, God’s hand was in the process the whole time. Within a week, another developer—one who had visited the building nine years earlier—presented a full-price offer with finances already secured.

The GARBC closed on the sale of its Schaumburg property on Feb. 12 for $4.5 million and the next day purchased, in cash, a $1 million building nine miles away in Arlington Heights. The GARBC then paid off its outstanding mortgage (about $780,000); paid for the renovations of the new building; put $1 million into its pension plan for employees; and invested the remaining funds with a low-risk, low- to midyield return. Nolan says, “Operational necessity requires that we ensure that expenses do not exceed revenues, and we have made intentional and strategic decisions for expense reduction and growth to ensure that our ministries would not—and will not—be dependent on any of the proceeds of the sale.”

One of those decisions took place in January 2014. Anticipating a move to a smaller office, the GARBC outsourced its shipping operations with Awana Clubs International, whose 80,000-square-foot warehouse was located one mile from the Resource Center’s Schaumburg property. Closing the Resource Center’s warehouse would save $200,000 a year. Customer service representatives still take Regular Baptist Press orders at the GARBC Resource Center, but now employees at Awana’s distribution center pick, pack, and ship RBP products.

After the sale of the Schaumburg property, GARBC staff began sorting, tossing, and organizing. “Can you imagine relocating an organization with 83 years of history? It is no easy task,” Greening says. Ted Weinberg, a missionary builder, helped a construction crew retrofit the new office to meet the association’s needs. Then the staff moved in to its new home on May 4.

From the sale of the former building to the purchase of the new one, “God went before us every step of the way.”

Help from a ‘Construction Evangelist’

Ted Weinberg is a retired missionary with the Association of Baptists for World Evangelism. For 17 years he ministered in “construction evangelism,” as he calls it, building facilities for church-planting missionaries in Africa and along the way sharing Christ with those he encountered on the job.

“While construction is what we do, we see construction as our platform,” he says, speaking also for his wife, Diane. “This gives us the opportunity to share Christ and disciple those who work with us, including our employees, suppliers, and volunteers who come to serve with us on short-term missions trips.”

Weinberg was most recently project manager for the 40-bed Wendell Kempton Ministry and Medical Center, also known as Hospital of Hope, that opened on March 2 in Mango, Togo, West Africa. Wendell Kempton (1932–2008) was a former president of ABWE and a GARBC leader, speaking at eight GARBC Conferences and serving on the Council of Eighteen for 16 years. The hospital that now bears his name, ABWE says, is “sharing the good news of Christ, the Great Physician, through practical ministry and quality health care.”

When Weinberg retired on April 30, he didn’t hang up his tool belt. “Vocation is difficult to separate from who you are,” he says. In retirement he has assisted local missionaries in church construction projects, including converting a former fire station into a church for a missionary couple in Idaho, and helped remodel his home church in Minnesota.

He and Diane say, “As we move ahead, it is our desire to assist in as many of these projects as we are able, as the Lord provides financially.”

Weinberg agreed to assist with renovating the new GARBC Resource Center, while Osman Construction Corporation, based in Arlington Heights, did the rest of the work. He was joined by Lowell Cruse, a fellow member of the Weinbergs’ church.

Ready to Serve for Years to Come

As with most moves, this one was not without its glitches: phone and Internet connections took longer than anticipated to set up, and the moving company changed dates at the last minute. But “God is good” and “the staff is thankful to the Lord for His provision,” says Daria Greening, John Greening’s wife and executive
assistant.

Relocating “has been a lengthy process,” John Greening says. “Negotiations moved forward sometimes at a snail’s pace. Getting the right offer as well as finding a new facility that met our requirements took an extended time and required thoughtful consideration. We are excited about our move. Our new location should provide a pleasant and creative environment for the staff, allowing us to better serve our fellowshipping churches, ministry partners, and customers.”

As Nolan says, the GARBC’s new location “will solidify our ability to help churches for years to come.”

Posted in All Current Issue Posts, July/Aug '15 Issue, The Baptist Bulletin Magazine on July 9, 2015.
SHARE ON: