The plot of the The Handmaid’s Tale forces us to ask, How do we as Christian husbands and wives interpret and implement the teachings of the Scriptures in our marriages? 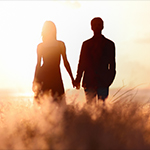 By John and Daria Greening

The Handmaid’s Tale, a current TV series adaptation of the same-titled book, pictures Gilead, a totalitarian society that withdrew from the United States following an internal war. In Gilead’s hierarchical regime, husbands, called “captains,” are high in authority, lording over low-level wives. Women are brutally subjugated. By law, females are not permitted to work, own property, handle money, or read. The husbands make harsh demands, enforce strict rules, live by a double standard—all while quoting Scripture to the wives as proof texts for behaving inhumanely.

In one cruel scene, a wife and a handmaid contrive to submit documents to the government, crafted by using their pre-Gilead political and editorial experience, without the husband’s approval. Discovering what they have done, the husband becomes furious, opens his Bible to Ephesians 5, and reads aloud to them, “Wives, submit yourselves unto your own husbands as unto the Lord. For the husband is head of the wife.” He then removes his belt and repeatedly whips his wife, forcing the handmaid to watch. The captain’s bruising and battering of his wife are meant to teach her and the handmaid a lesson: they are to never intrude into his domain or initiate an action without his permission.

This literary caricature of the marital relationship may be easily dismissed by Christians because of its extreme graphic nature. Yet the plotline forces us to ask, How do we as Christian husbands and wives interpret and implement the teachings of the Scriptures in our marriages?

Posted in All Current Issue Posts, Jan/Feb '19 Issue, The Baptist Bulletin Magazine on February 15, 2019.
SHARE ON:

Next post Should We Abandon Biblical Manhood and Womanhood in a #MeToo Culture?

Two weeks ago Prasad Sakile was evangelizing door-to-door when people attacked him and his ministry ...more

The GARBC Christian Character Scholarship competition has awarded a total of $18,500 to 14 high school seniors from GARBC ...more

Baptisms in the Democratic Republic of the Congo

Pastor Safari Munyakazi is president of the Community of Free Baptist Churches in Congo. He sends the following ministry update. I would like to share with ...more