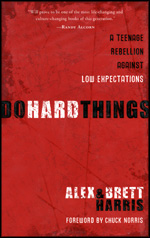 A Teenage Rebellion against Low Expectations

Alex and Brett are brothers of well-known writer Joshua Harris, who wrote such forceful books as I Kissed Dating Goodbye. The twins are already considered among the most widely read teen writers on the Web. The premise of this book is that too many Christian teens are not discovering and achieving their potential but are stifled by the status quo. One endorsement of the book reads, “Our generation is filled with apathetic, complacent, and immature wimps. By contrast, Brett and Alex are leaders in our generation, and their message is that you can be too.”

Brett and Alex challenge the reader to think beyond the modern negative concept of “teenager” and instead think of positive examples of teens throughout history. One example they use is that of Clara Barton, founder of the American Red Cross. Already at age 11 she was caring for the ill in her family and village.

After the authors identify five kinds of “hard,” which form the remaining challenging sections of the book, a chapter, “That First Scary Step,” is about getting out of one’s comfort zone and responding to opportunities. Another chapter is “Taking a Stand,” which shows how to do hard things that go against the crowd.

This book might be just the motivation to get a young person really accomplishing things for God. Grown-ups would profit from the book as well, not only to help pilot youth but to renew resolve in their own lives.

Tags: Book Reviews
Posted in The Baptist Bulletin Magazine on October 30, 2009.
SHARE ON: