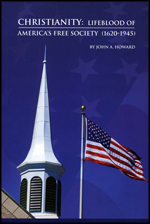 Here’s a good summary of Christianity’s effects on America, particularly from the time the Pilgrims came to the U.S. through World War II. Powerful preachers of the 1700s are noted, followed by focus on the revival fervor of the 1800s.

Chapter 7 is titled, “The Transition Away from Christian Authority in an Era When the Principles of Christendom Still Prevail (1900–1945).” The seeds of secularism were being sown. The last two chapters show how decades since the end of World War II have brought the demise of “the religious character of education,” among other detriments. Is there a way back to what we once were as a nation? the book asks. Chapters end with supplementary quotes concerning the subject matter.

Tags: Book Reviews
Posted in The Baptist Bulletin Magazine on February 18, 2010.
SHARE ON: