Are We in a Care Crisis?

Why is it that we Christians can be guilty of shrinking away from opportunities to reach out to people who may be in need? 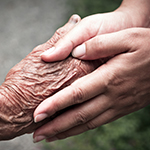 By David A. Jones

He irritated and intimidated me. I found him to be overbearing and somewhat obnoxious. I tried to hide from him. I resisted the very thought of getting closer to him so I could witness to him. Yet God kept bringing him across my path frequently.

He was my early morning newspaper deliveryman. Henry and I crossed paths several times a week as I sought to walk off some excess weight in the much-desired privacy and solitude of the predawn, and avoiding him became part of my exercise routine. Over several years of time, my every unpleasant contact with him drove me farther away. I knew that God cared about him, but my attitudes and actions certainly indicated that I, a pastor, did not care for him at all.

Why is it that we Christians can be guilty of shrinking away from opportunities to reach out to people who may be in need? Why do churches have difficulty getting volunteers to sit with the elderly, help a struggling single mom, visit a hospital patient, or build relationships with lost people in their neighborhoods? The excuses I have used include my pastoral busyness, weariness, selfish priorities, or, in Henry’s case, a low-grade fear and revulsion to his appearance and attitude. I have recently had several opportunities to discuss the matter of “compassionate care” with believers in several churches, classrooms, and conferences, and the sentiments were unanimous. The personal-touch level of care for others by Christians and their pastors is on the decline and in some places has almost disappeared from the scene. Is this not a problem?

Do the Scriptures emphasize this area of ministry among Christians? How important might it be? Let’s examine this subject from several vantage points.

Posted in All Current Issue Posts, July/Aug '15 Issue, The Baptist Bulletin Magazine on July 9, 2015.
SHARE ON: