A Tale of Two Churches Becoming One 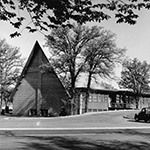 At last, the final count was in. The measure had passed with over 90 percent approval. No one had expected this level of unity, but nearly everyone had hoped for it. And it happened again at the second church.

Two churches merging is not unique, but in this case, the two churches carried individual and combined history. They had at one time been one church!

Posted in All Current Issue Posts, July/Aug '14 Issue, The Baptist Bulletin Magazine on August 1, 2014.
SHARE ON: