Get to know Rev. Vernon Rosenau, president of Baptist Mid-Missions, as he shares his heart for BMM and his passion for the Great Commission. 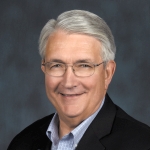 On Jan. 1, 2016, Rev. Vernon Rosenau began his tenure as Baptist Mid-Missions’ fourth full-time president, succeeding Dr. Gary Anderson. The Lord has given us a new leader who can build upon our strengths and create a strong future.

Vernon’s roots run deep in Baptist Mid-Missions: His grandparents served on BMM’s first missionary team in what is today Central African Republic (CAR). Vernon was the third generation of his family to serve in CAR, where he and his wife, Jan, spent 24 years. In 1999, they were called to BMM’s Home Office, where Vernon served as field administrator for Africa and Europe until his call to the presidency. Vernon and Jan have three adult children: Julie, Bill, and Sam.

Get to know our new president as he shares his heart for Baptist Mid-Missions and his passion for the Great Commission.