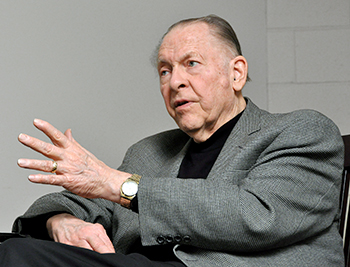 On Feb. 5, John C. Whitcomb Jr.—theologian, Old Testament scholar, and one of the principal founders of the modern creationism movement—passed away at his home in Indianapolis, Indiana. He was 95. From his strong convictions on Biblical inerrancy to his legacy as a leading young earth creationist, Whitcomb’s life and ministry reflected an unswerving devotion to the Word of God.

While Whitcomb will primarily be remembered for his contributions to creationism, his expertise in Biblical studies and theology extended far beyond the pages of Genesis 1—3. In his many decades of ministry, he labored to teach “the whole counsel of God” (Acts 20:27) with clarity and conviction. “I want to be known, if for anything, as a Bible expositor,” Whitcomb once said in an interview with Paul Scharf. “Creation is absolutely essential, but it is not sufficient for a God-ordained teacher. I want to be balanced in my teaching of theology.”

Whitcomb acquired his strong convictions later in life. The Bible had no significant impact on his upbringing, as he was raised in a non-Christian home. Nor could anyone have predicted that John would someday enter the ministry. Growing up, he was expected to follow in the footsteps of his father, Col. John Whitcomb Sr., a career military man. But the trajectory of his life changed during his freshman year at Princeton University when he began attending a Bible study led by faculty member and former missionary Donald Fullerton. After sitting under Fullerton’s teaching for several weeks, Whitcomb realized his need for a Savior and trusted in Christ for salvation. In February 1943, at the age of 18, he penned these words to his parents: “Nothing better could possibly have happened than my coming to Princeton, because if I hadn’t come here, I probably never would have found out about this. Mr. Fullerton, my Bible class teacher, has helped me a great deal in seeing what the Bible really means. . . . All the Bible ever asks of a person is that he read it, and think about it, and BELIEVE IT. And that is what I want to do.”

Although a military career was not in store for Whitcomb, he did follow in his father’s footsteps—after a fashion. The same year that John became a Christian, he was forced to briefly suspend his education and answer his country’s call. John was drafted. He served in the European theater of World War II from 1944 to 1946.

After the war, Whitcomb returned to Princeton. He graduated with honors in 1948, and with Fullerton’s encouragement, went on to attend Grace Theological Seminary. He received his ThM in 1953 and ThD in 1957. Whitcomb’s growing desire was to preach and teach the Bible, and he was asked to join the seminary’s faculty in 1951. He taught Old Testament and Christian theology at Grace for 38 years. During this time, he also served as chairman of the Christian Theology department, director of Doctoral Studies, and editor of Grace Theological Journal.

Although Whitcomb had a strong burden to teach the inerrancy of Scripture to his students, he was initially unsure what to make of the Genesis creation account. As a former evolutionist, he was inclined to accept the Gap Theory as a plausible harmonization of the Biblical text and the scientific consensus on origins. It wasn’t until 1953, when he heard Henry Morris present a paper titled “The Deluge Theory of Geology,” that he began to consider a literal interpretation of the creation account. At the time, such thinking was novel; most fundamentalist and evangelical Christians in those days accepted either the Gap Theory or the Day-Age approach to Genesis 1 and 2. But upon encountering Morris’s work, Whitcomb was immediately struck by its plausibility and fidelity to the Biblical text. This line of thinking led him to write his doctoral dissertation on the Biblical doctrine of the Flood, and later to collaborate with Morris on a landmark book: The Genesis Flood.

The Genesis Flood was born out of a need for a literal interpretation of the Genesis creation and flood accounts, and was written to a culture steeped in naturalism. In their introduction, Whitcomb and Morris wrote, “We desire to ascertain exactly what Scriptures say concerning the Flood and related topics. We do this from the perspective of full belief in the complete divine inspiration and perspicuity of Scripture, believing that a true exegesis thereof yields determinative Truth in all matters with which it details. We accept as basic doctrine the verbal inerrancy of Scripture.”

The book quickly became a bestseller. Since 1961, it has been continuously in print and was even featured on Christianity Today’s list of “Top 50 Books That Have Shaped Evangelicals.” Creationist scientists and theologians have since then developed a large, rich body of literature, but at the time The Genesis Flood was one of a kind. It is no understatement to say that this book singlehandedly launched the modern creationist movement.

In fact, The Genesis Flood influenced the GARBC to clarify its position on the Genesis creation account. Before its publication, belief in a literal, 24-hour creation day was not required for a church to join the association. In 1964, the Baptist Bulletin publicly endorsed Whitcomb and Morris’s views in an article titled “The Genesis Account of Creation” by Arthur Williams. At the 1969 GARBC conference, the resolution “Verbal Inspiration and the Twenty-Four Hour Day” promoted a literal view of the creation account in Genesis. This developing consensus among Regular Baptists culminated in a formal revision to the GARBC Articles of Faith in 1975, recognizing creationism as the association’s official position on origins.

Throughout his life, Whitcomb wrote over 20 books. Many of these were related to creationism (e.g., The World That Perished, The Early Earth, The Origin of the Solar System), but others addressed topics such as evangelism and missiology (Christ: Our Pattern and Plan), the charismatic movement (Does God Want Christians to Perform Miracles Today?), and eschatology (The Rapture and Beyond). Whitcomb also wrote commentaries on Esther, Daniel, and Jonah, and cowrote a lengthy commentary on Joshua through 2 Kings with John J. Davis (Israel from Conquest to Exile). Additionally, he wrote numerous Biblical and theological articles and essays. His writings reflected his unshakeable faith in the inerrancy and authority of God’s Word and frequently argued for creationism, the historical reliability of the Bible, and a dispensational approach to Biblical prophecy.

After teaching at Grace Theological Seminary for nearly 40 years, Whitcomb and his wife, Norma, founded Whitcomb Ministries. John’s lectures and Bible courses were videotaped in a project called “Christian Workman Studies in Theology” and disseminated through the new ministry. The project soon grew to include lectures and courses from other qualified professors, providing curriculum and resources for seminaries, missions organizations, and churches around the globe.

During his retirement years, Whitcomb stayed busy lecturing and speaking at conferences all over the world. He lived in Indianapolis with Norma, who frequently joined him in his travels and ministry endeavors. After interviewing Whitcomb in 2017, Mike Matthews wrote, “It is clear that Dr. Whitcomb wants every last moment of his life to matter in what counts most. With his last breath he wants to stand up for God’s Word from the first verse to the last, and he yearns to pass down this passion to the next generation.”

When the Baptist Bulletin interviewed Whitcomb in 2010, we concluded the interview by asking him “What’s next for you?” Whitcomb’s reply perfectly encapsulates the love for Christ and trust in His Word that characterized his life and ministry:

Guess what’s going to happen next? After the dead in Christ rise, the living Christians will join them in an upward call to meet Him in the air. And I say, “Lord, I can’t wait!” When we see the Lord, we will be like Him and we will see Him as He is. This hope we have in Him purifies us even as He is pure. It motivates us because we will be accountable—perhaps in the next five minutes!—to the Savior Who gave His life for us. That’s a powerful motivation, isn’t it—the moment by moment anticipation of His appearing!

John C. Whitcomb is with Jesus now, the Savior he loved so much. But his life and legacy will continue to influence believers for years to come. He was (and is) an inspiration to countless Christians who endeavor to take God’s words seriously—from Genesis to Revelation—and to all of us who love Christ’s appearing.

Haley Seboe Cleveland is an admissions counselor at Clarks Summit University. David Gunn is director of Regular Baptist Press and managing editor of the Baptist Bulletin.

Posted in All Current Issue Posts, Ministry Highlights on February 6, 2020.
SHARE ON:

Previous post Perspective: Finding Contentment in an Age of Cynicism and Comparison