A Ministry of Presence

Pam Russell's mission to represent Jesus in the capitol. 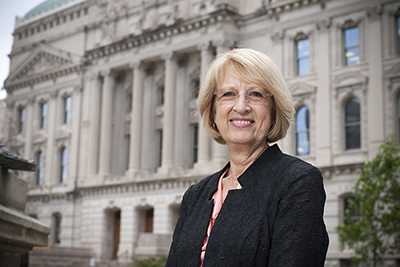 By Darrell Goemaat and Jonita Barram

With no salary, no office, and no place even to leave her purse, Regular Baptist Chaplain Pam Russell describes her role as a “ministry of presence” to the public servants who work in all levels of government in the Indiana Statehouse.

Serving as the only female chaplain with Capitol Commission, Pam has been developing deep friendships with key leaders and their staff in Indiana government by doing one thing. Whether it’s Gov. Mike Pence, his secretary Katie Gilson, or Secretary of State Connie Lawson—all believers—Pam has initiated the relationship with the same question: “How can I pray for you?”

Pam asks because it shows that, unlike everyone else legislators meet, she does not want anything from them, and because “that’s the call of 1 Timothy 2:1–5, to pray for our leaders.” The question seems to disarm people and pull down defenses, Pam says. “I am never turned down. Few say, ‘Oh, I don’t need prayer.’ Almost everyone will immediately mention something that I can pray for, like a sick loved one, or good health and strength.” She also says praying for them is the most effective way to establish a relationship of care, which then becomes a relationship of trust, which leads to a close relationship. “We build bridges of grace that will bear the weight of truth,” she says, quoting Randy Alcorn.

From Almond Tree to Capitol Commission

When Pam was first approached about ministering to women at the statehouse, she didn’t think she could add it to her already full plate. She was serving as director of Almond Tree, a substance-abuse training ministry. An Indiana law enforcement chaplain and a member of the Association of Certified Biblical Counselors, Pam had spent two decades counseling in and out of correctional settings. She was writing her own materials so churches and individual believers could also counsel substance abusers and their families. The materials have since been published by Regular Baptist Press as More than Sobriety: Resources for Biblical Substance Abuse Counseling and Addiction: A Family Affair. Pam was honored to be considered for the statehouse ministry but had decided to turn it down. Her husband, however, advised her not to do that.

Now Pam serves as director of both the Indiana state women’s ministry and the national women’s ministry for Capitol Commission, which provides a pastoral presence in our nation’s state and federal capitols with the goal of reaching every person with the gospel of Jesus Christ. Pam loves her work and its challenges. One of the biggest is connecting with local churches to open eyes to what God is doing in the political arena and to encourage Christians to be engaged with their local and state politicians—not over policy, but seeing them as people with regular lives and struggles, people who need to be loved, encouraged, and prayed for.

“As we develop relationships with them, the goal is to share Christ with them and disciple them. It’s all about the Great Commission,” Pam says. One way she has shared her burden is through her women’s Bible study, Beyond the Ballot: A Call to Pray for Your Nation, also published by RBP. As a missionary, Pam is supported by two Indiana churches, Bible Baptist in Kokomo and Aboite Baptist in Fort Wayne. She is endorsed by Regular Baptist Chaplaincy.

Manning Brown, director of Regular Baptist Chaplaincy, says Pam’s ministry with Capitol Commission exemplifies the unique ministry of chaplaincy. “Whether in the foxhole, in a squad car, or in a legislator’s office, our chaplains are there to comfort, encourage, and above all glorify Christ. I am thankful for Pam and her willingness to serve.”

Strolling through the capitol rotunda on a Tuesday morning, Pam waves to a woman pulling a rolling briefcase, with a raincoat and umbrella draped over her arm. Pam says, “Hi, Connie.” A few steps later Pam says, “That’s the Indiana secretary of state, Connie Lawson, on her way to work just like everybody else.” A few steps later, a voice says, “Hi, Pam.” It’s Judge Robert R. Altice of the Court of Appeals.

Pam meets privately for regular prayer and Bible study with State Treasurer Kelly Mitchell, who is also a pastor’s wife and mother of two college-age children. Pam does the same with Connie Lawson. Both women are believers.

At noon every Tuesday, Pam meets for an hour with a group of female statehouse staff members for prayer and Bible study. They meet in the statehouse chapel, a narrow, dimly lit room on the second floor. The room features a stained glass window with an open Bible beneath it.

Today the ladies are studying the book of Acts. They have all filled in answers to Pam’s study guide. The women are excited to be part of this community even though each one is dedicating her lunch hour to be here. They all ask earnestly about each other’s families and prayer requests. All have come prepared to discuss the passage, and they have some pretty insightful questions for Pam.

Pam originated the Bible study, announcing it at the weekly chapel service, inviting women to attend, and setting a date. “And they came!” she says. Six years later, they’re still coming. The group includes women who hold statewide office and those who serve others in statewide office, as well as women who work in connected government agencies like Family Services, Information Technology, and the Department of Corrections, including paralegals, lawyers, cartographers, and social workers.

Not all of the women are believers, but many are hungry to know the Word of God, so their questions revolve around Scripture, as well as typical concerns of women, such as how to balance a profession with marriage and family. The women are grateful to Pam for the time she spends leading their study and for bringing the study to them. Pam says they love digging into the Word, are amazed at finding it relevant, are thankful to be prayed for, and are encouraged by praying for each other. “It’s an oasis in a tough environment,” says Pam.

Pam serves with Matthew Barnes, also with Capitol Commission. His ministry as chaplain of the statehouse has provided opportunities for him to lead Bible studies, chapel services, annual prayer services, prayer breakfasts, and Pastors’ Statehouse Day. According to Capitol Commission, these events, combined with faithful interaction within the statehouse community, have opened many doors for sharing the gospel and testimonies of God’s faithfulness. Manning Brown notes that Matt is the consummate listener, as is Pam. “Knowing that there is a nonpartisan listening ear is a great comfort to many. They have a unique trust with those to whom they minster.”

Twelve years ago, Sen. Dennis Kruse, who has a heart for the Lord and his fellow legislators, named Matt the first chaplain of the statehouse. Matt and Pam coordinate regular Bibles studies, chapel services, and one-on-one meetings around lunch hours, breaks, and before and after the work day. They also plan major events around the legislative calendar, events like the annual prayer service, Pastors’ Statehouse Day, and Women’s Statehouse Day. They also offer a biweekly ministry that has become so popular the dates have been added to the legislative calendar: Books and Bagels gives Pam and Matt an opportunity to casually engage with legislators and staff over coffee and bagels and free literature.

This relationship building also extends to decision-makers in both houses of the legislature who have commented over the years on the effect Pam’s and Matt’s mere presence has had on political discussions. That ministry of presence has been observed by lawmakers on both sides of the aisle as Pam and Matt have for years just sat quietly on the House floor while the business of state government was argued and debated.

The most significant praise for Pam and Matt’s ministry came from Speaker of the House Brian Bosma when he publicly described both chaplains’ presence as having a calming, civilizing effect on arguments that could potentially have become heated and vitriolic. Their presence “changes the tone of the discourse,” he said. One female legislator, after a very hard battle over a bill on abortion, privately told Pam afterwards that her being there “encouraged me to speak as I needed to when many were not wholly with me.”

Pam needs additional prayer and financial support and hopes churches will catch the vision for her ministry. Beyond that, she encourages them to consider the political arena as a viable mission field: “Public servants are quite an unreached people group. And as the Lord says in Acts 1:8, start in ‘Jerusalem and Judea,’ your own communities where this people group lives and works. Get to know your local and state public servants. Come alongside them, love them, and pray for and with them. Many know the Lord and need your encouragement. Many are lost. Win them.”

Darrell Goemaat is an award-winning photojournalist. He works as a freelance photographer for the Chicago Tribune, covering sports, concerts, and human interest stories, and is photography director at Regular Baptist Press. Jonita Barram is assistant editor of the Baptist Bulletin.