Never once have I heard my father use a swear word, which I think is significant. 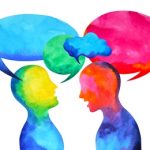 Never once have I heard my father use a swear word, which I think is significant. In fact, I’d say I grew up in a pretty sheltered environment. This included being part of a conservative Christian family who attended church whenever the doors were open, living at a Christian camp, and attending Christian schools from kindergarten until 12th grade. We were not allowed to go to the movies or listen to secular music. I even remember having to turn off the television any time a colorful or suggestive word was broadcast into our home. Still, somehow, I found myself exposed to swear words.

Probably like many other junior high boys, I found something compelling about using language that was supposedly reserved for adults. Of course, initially I didn’t actually say them out loud, but I did find myself thinking them quite regularly. Then it was only a matter of time before one slipped out, then another.

We humans have an innate ability to rationalize ourselves in and out of anything, so I constructed what seemed like logical arguments. For example, who decided that certain four-letter words should be labeled off-limits? Why should a simple arrangement of letters take on any meaning of significance? And anyway, they’re just words—what or whom do they really hurt?

This line of thinking led me down a road that was difficult to reverse even when I wanted to enact change. But at some point, I realized that words are not neutral. Proverbs 18:21 says, “Death and life are in the power of the tongue, and those who love it will eat its fruits.” When it comes to our words, we need to understand that they produce death or life—there is no in-between. Perhaps the most graphic illustrations of this truth come from James 3, where the tongue is described as a tiny bit that controls a mighty horse, a little rudder that changes the direction of a large ship, and a small spark that ignites a raging fire. But then in verses 9–12 we see the either/or proposition:

With it [the tongue] we bless our Lord and Father, and with it we curse people who are made in the likeness of God. From the same mouth come blessing and cursing. My brothers, these things ought not to be so. Does a spring pour forth from the same opening both fresh and salt water? Can a fig tree, my brothers, bear olives, or a grapevine produce figs? Neither can a salt pond yield fresh water. (ESV)

There is a reason four-letter words are described as “curse words.” None of those words are associated with blessing someone; rather, they are used only to put down, to speak of in a derogatory light, or to react to something bad. This says something about a culture that has evolved to a state where these words are commonplace. The common, accepted language of the day is not neutral, nor is it uplifting. Is it any wonder then that acts of kindness and words that express authentic, genuine care either are looked upon with suspicion or are spotlighted as rare examples the rest of us should be inspired to follow?

Words Build Up or Tear Down

Here’s the thing: crossing swearing off your list isn’t even the point; no, Scripture has a much higher standard than that! Ephesians 4:29 says, “Let no corrupting talk come out of your mouths, but only such as is good for building up, as fits the occasion, that it may give grace to those who hear” (ESV). Again, we see an either/or proposition. Paul’s admonition is to use speech that exclusively builds others up in order to minister grace. Clearly, there is to be no place for language that puts people down or that could be characterized as ungracious, whether swearing or otherwise. Paul follows up this admonition in verse 32 with a command toward kindness: “Be kind to one another, tenderhearted, forgiving one another, as God in Christ forgave you” (ESV). In this case, we see that kindness is an expression of our forgiveness; thus, edifying speech and kind actions should be the norm, not the exception, for those who call themselves followers of Christ.

If Scripture were not enough reason to shift the tone and quality of our language, then let me illustrate some practical reasons. Everyone has experienced the power of words. In fact, it is quite common to hear writers, actors, and even presidents say something like this: “I wouldn’t be where I am today if my third grade teacher hadn’t said, ‘You could be a _____ someday.’” Conversely, we know from experience how certain words kept us (and sometimes continue to keep us) from reaching our potential. Conduct this little mental exercise with me: Think back over your life, quickly focusing on six faces—three people who spoke a positive word to you, moving the trajectory of your life in a good direction, and then three people who spoke a word to you that caused you to doubt or lose confidence.

For example, I remember a teacher in high school who pushed me to enter a speech competition. I made some mistakes and thus received second place, but that competition opened a door I didn’t realize existed and caused me to consider ministry (a role that required public speaking) as a career to pursue. On the other hand, I can clearly remember being told as a sixth grader that I couldn’t hack math classes. Consequently, instead of pushing myself to struggle through, get the help I needed, and learn the basics, I relegated myself to failure. I assumed I didn’t have the ability, which led me down a path of disappointment and discouragement. Keep in mind that while we can each readily identify the people in our histories who spoke either words of life or words of death into our stories, we fail to recognize the potential for us to do the same in the lives of others.

Words Can Be Put On or Taken Off

If our words truly do hold the power of life or death, how can we strategically shift the quality of our words? The apostle Paul wisely explains that we must not merely stop what we are doing, but instead we must replace it with something else. Colossians 3:8–17 explains:

[Put off] But now you must put them all away: anger, wrath, malice, slander, and obscene talk from your mouth. Do not lie to one another. . . .

[Put on] Put on then, as God’s chosen ones, holy and beloved, compassionate hearts, kindness, humility, meekness, and patience, bearing with one another and, if one has a complaint against another, forgiving each other; as the Lord has forgiven you, so you also must forgive. And above all these put on love, which binds everything together in perfect harmony. And let the peace of Christ rule in your hearts, to which indeed you were called in one body. And be thankful. . . . And whatever you do, in word or deed, do everything in the name of the Lord Jesus, giving thanks to God the Father through him (ESV).

As routine as it is for us to take clothes off at night and to put clothes on in the morning, we need to remove bad speech habits and replace them with words that communicate compassion, kindness, humility, meekness, patience, forbearance, forgiveness, love, peacefulness, and thankfulness. This requires strategic planning and intentional effort. However, if we desire to be the kind of people who are remembered for influencing others and for creating positive life change at pivotal moments in a person’s life, then we can’t let words simply tumble out of our mouths without any filter. Instead we must look for opportunities to speak words of life—words of wisdom and encouragement—to those we encounter.

Posted in All Current Issue Posts, May/June '20 Issue, The Baptist Bulletin Magazine on September 10, 2020.
SHARE ON: