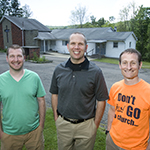 Harris Hill Baptist, Williamsville, N.Y., was granted $2,500 to assist with a much-needed new roof, while Bethel Baptist, Pierceton, Ind., will be expanding its building with help from a $10,000 grant and possible $5,000 loan. With a $10,000 loan to help pay for improvements, Faith Baptist, Fowler, Colo., will become even more accessible to people with disabilities.

Meanwhile, Restored Church, Wilkes-Barre, Pa., has entered its second year of Baptist Builders Club’s three-year Start Up plan that offers services, support, and financial assistance for church plants. This church has received a $5,000 grant for the year.

Bridgewater Baptist, Montrose, Pa., also knows firsthand the assistance Baptist Builders Club can provide, having previously received an interest-free loan to help build a new facility after outgrowing its 1899 structure. But this time Bridgewater sent an application for help with the rescue of South Vestal (N.Y.) Baptist Church. Ethan Morrison, a former Bridgewater Baptist pastoral intern, has been installed as campus pastor at South Vestal.

Nolan is so excited about what is happening in Montrose and South Vestal that he has lined up a missions team interested in providing children’s workers to conduct a Vacation Bible School or similar outreach ministry, as well as people to help renovate the church’s building and parking lot.

In wrapping up the good news to these churches, Nolan says, “Baptist Builders Club is your GARBC fellowship in action.”

Baptist Builders Club’s efforts to be a “fellowship in action” also include providing disaster relief to hurting communities around the nation.

On Saturday, April 5, 15 members of Grace Baptist Church, Emmetsburg, Iowa, including Pastor Curtis DeFord, took part in a day of training so they would be prepared to go and serve when a natural disaster strikes. As Nolan states, it is not a question of if a disaster will occur, but when. Nolan led the team through three online training sessions: FEMA 100, FEMA 200, and Basic First Aid. These individuals now know how to keep themselves and others safe and understand how to serve alongside a state or government agency in a disaster.

At the end of the training day, the group received homework: they would need to take FEMA tests online and send the certificates they earn to the Baptist Builders Club office. Then they would be considered “Ready Now” teams who would be allowed access into disaster-hit areas. After a disaster strikes, they would work through a local church to lead in relief efforts.

Donations from GARBC churches and individuals make this Disaster Relief ministry possible. Baptist Builders Club collects financial donations and distributes the funds to churches as needs arise, enabling the purchase and shipment of rescue equipment and safety gear. The goal is to raise $53,572, the cost for critical disaster relief tools. So far almost $20,000 has been donated.

In addition to these financial resources that meet physical needs, Baptist Builders Club partners with Gospel Literature Services to meet spiritual needs. GLS donates literature that is relevant to those in crisis situations. It first did so in 2001 by producing and distributing a booklet called Why? after 9/11. Today copies are still being produced and distributed following tragedies, such as when a shooting occurred on the campus of Santa Monica College in June 2013, when a fire ravaged Colorado Springs that same month, and when a mudslide struck Oso, Wash., in March 2014. The booklet answers the questions people commonly ask following a tragedy: Why did this happen? and Why does God allow evil?

It’s in communities facing disasters like these where Baptist Builders Club is prepared to serve with both sweat equity and financial equity. Through its Disaster Relief program, people are ready to give and ready to go.

Whether lending financial aid to a church to help it grow or supporting a community after a disaster, Baptist Builders Club is building churches and rebuilding communities.

Individuals and GARBC churches can join those who are giving and going by donating online and volunteering to become FEMA trained at BaptistBuildersClub.org. After becoming a member of Baptist Builders Club, individuals will receive up to five requests a year for support, and they may choose to respond through prayer, a financial donation, or both.

Next post A Holistic Approach to ESL as an Outreach Tool

Anthony Mendoza, Pastor to the Deaf

Anthony Mendoza, whose passion was to teach God’s Word to the deaf, died Dec. 27. He was ...more

Jim Douglass, who served on the pastoral staff of Northridge Baptist Church in Des Moines, died Dec. 24. He was ...more

Joseph Akakpo ministers with the Association des Eglises Baptistes Bibliques du Togo. He sends the following ministry report. In 2021, the Lord blessed us enormously with ...more

Dr. Mike Stallard presented his paper “An Analysis of John Calvin’s Criticism of Premillennialism in 'The Institutes'” at the 30th Annual Pre-Trib Study Group ...more