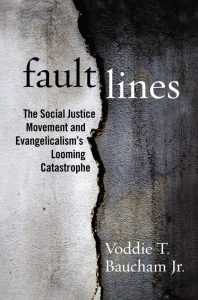 Critical theory, critical race theory (CRT), intersectionality, the social justice movement—all are front and center in daily news broadcasts across the US in one form or another. Bible-believing Christians may be alarmed at what is occurring in the culture, but they may also believe the church is insulated from the mayhem caused by these movements. In Fault Lines Voddie Baucham points out that the camel’s nose is already in the tent.

As his book title indicates, Baucham asserts that American evangelicalism is split over these issues. Some evangelicals have taken up the mantle of racial injustice, declaring that “black lives matter” and calling critical theory a “gospel issue.” The names Baucham cites are both familiar and compelling. Why is this important to us? Baucham notes that this issue is not simply ethnic or political; it is “social justice versus biblical justice.”

Baucham traces his history from the projects of south central Los Angeles, to the high school football factories of Texas, to the University of New Mexico, where he met the Lord Jesus. He describes himself in those years as “Afrocentric, . . . more black than Christian.” But God was at work, molding him into a man He could use.

In chapters 3–5, Baucham rehearses the racial upheaval in American culture over the last couple of years. He provides a factual perspective of the common narrative to aid the reader in understanding these recent developments in the evangelical church. Beginning in chapter 6, he demonstrates how CRT has captured the imaginations of well-known and respected Christian leaders and influencers, including leading figures in T4G, Christianity Today, and the Southern Baptist Convention. He devotes considerable space to discussions of the “Dallas Statement on Social Justice and the Gospel” (including Appendix 1) and “Resolution #9 on Critical Race Theory and Intersectionality” (Appendixes 2, 3), which was approved on the floor of the 2019 SBC Convention and later repudiated by the Council of Seminary Presidents of the Southern Baptist Convention.

One quote from Baucham (p. 204) stands out as a purpose statement and call to action: “This book is, among many things, a plea to the Church. I believe we are being duped by an ideology bent on our demise. This ideology has used our guilt and shame over America’s past, our love for the brethren, and our good and godly desire for reconciliation and justice as a means through which to introduce destructive heresies. We cannot embrace, baptize, or Christianize these ideologies. We must identify, resist, and repudiate them. We cannot be held hostage through emotional blackmail and name-calling. Instead, we must ‘see to it that no one takes you captive by philosophy and empty deceit, according to human tradition, according to the elemental spirits of the world, and not according to Christ’ (Colossians 2:8).”

Baucham is a voice of passion for the genuine, unadulterated gospel of Jesus Christ amid a culture-driven lurch away from that gospel. His book will help the reader understand and respond to the issues God’s people face within evangelical Christianity.

—Stan Lightfoot is pastor of Rustic Hills Baptist Church, Colorado Springs, Colorado, and has served on the GARBC Council of Eighteen.

OUR RECOMMENDED RESOURCES ARE ALWAYS PRODUCTS WE LOVE. PURCHASING THROUGH THESE LINKS SUPPORTS REGULAR BAPTIST MINISTRIES.