We are witnessing the rise of a “get ’em” culture characterized by a mob mentality and a taste for retribution. Refusal to toe the line of political correctness leads to loud and intolerant public outcry calling for the silencing and punishment of the offending party. 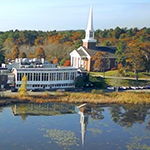 These are but a few of the headlines chronicling the firestorm that erupted in mid-July. It all began with an open letter to President Obama signed by 14 Christian ministry leaders. The letter requested that the president include religious exemption language in his then-forthcoming executive order that would ban anti-LGBT hiring practices by federal contractors. Gordon College’s president, D. Michael Lindsay, was one of the letter’s cosignatories.

The letter requested nothing earth-shattering. Indeed, the requested exemptions were already present in the Senate-passed Employment Non-Discrimination Act of 2013 (which has not yet passed the House). Nevertheless, Gordon College immediately drew heavy criticism. Salem, Mass., Mayor Kimberley Driscoll swiftly terminated a contract between the City of Salem and Gordon College that entrusted care of the historic Old Town Hall facility to Gordon. Even more alarming, newspapers began reporting that Gordon would be subjected to an accreditation review in September. Understandably, this created consternation among Christian educators and students. Would Gordon’s accreditation be revoked as punishment for the school’s allegedly discriminatory policies? And if that happened, how long would it be before other Christian institutions received the same treatment?

Posted in All Current Issue Posts, Sept/Oct '14 Issue, The Baptist Bulletin Magazine on September 3, 2014.
SHARE ON:

Leader in Africa Sends Thanks for Support

A pastor in Central Africa reflects on "the challenges, opportunities, and moments of celebration from ...more

Josiah Abedu-Kennedy is vice president of the Association of Fundamental Baptist Churches in Accra, Ghana. He sends the following ministry update. We are thanking the almighty ...more

“Get a Grip” on your marriage was the theme of the Marriage Refresh retreat hosted by the Northeast ...more